Nike We Own The Night 10k : Review

Nike We Own The Night 10k – my second 10k ever, and number 2 in 2 weeks, how did it go?
Well, in short I smashed my time from She Runs Windsor and ran all the way! I’d say that was a pretty successful night 🙂

Being part of Leah’s “Team Naturally Run” was what inspired me to sign up for the race in the first place, and apart from the satisfaction of my time of course, the team spirit was the best part about the evening. 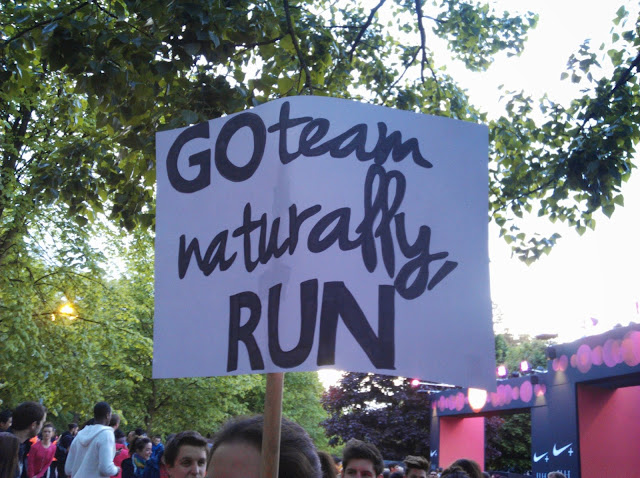 Running can be such a solitary sport- you’re racing for yourself, often in a little iPod bubble, and up until recently most of my training had been conducted this way too.
Meeting such a lovely bunch of ladies over the course of the weeks leading up to the race, and sharing training sessions with them has definitely brightened up my running experience! The overwhelming friendliness and motivational enthusiasm was inspiring. 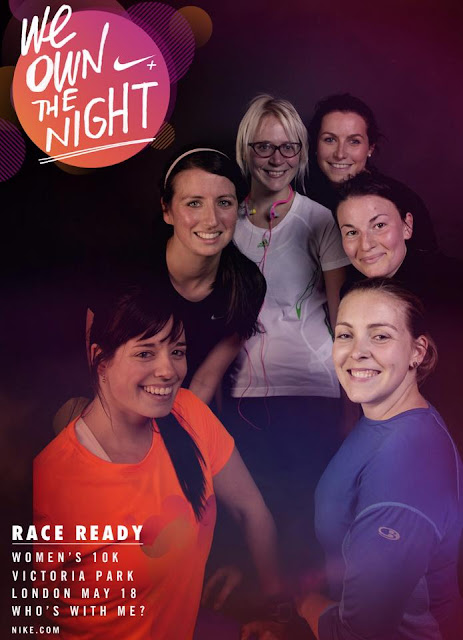 And if I’m honest their support had a big impact on my result – I was aiming for a conservative 1:10:something, so knocking a bit off my previous time, but nothing too ambitious. I don’t like to set goals I don’t think I can achieve, but Charlie told me to “go for it”, and I can “definitely make under 1:10”, so I guess that’s what I did! 🙂
The race itself was unfortunately not so inspiring – for Nike being such a large brand, the organisation was terrible. Their “event village” was a great set-up, with a DJ on stage, beanbags to laze about it, food and drink stands, and a tent with magazines where you could book a manicure. 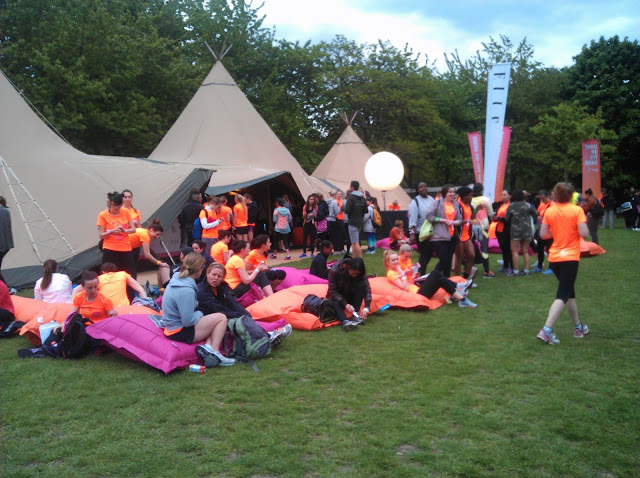 The problem was that entry was restricted only to those running the race, so all boyfriends/family/friends had to stand around outside, with not even a drinks stand available for them! And as most runners would have been aware, eating so close to the start of the race and trying new things you’d never eaten before (erm, meringues anyone?) is a big no-no before a race, so they can’t have made much money out of it. 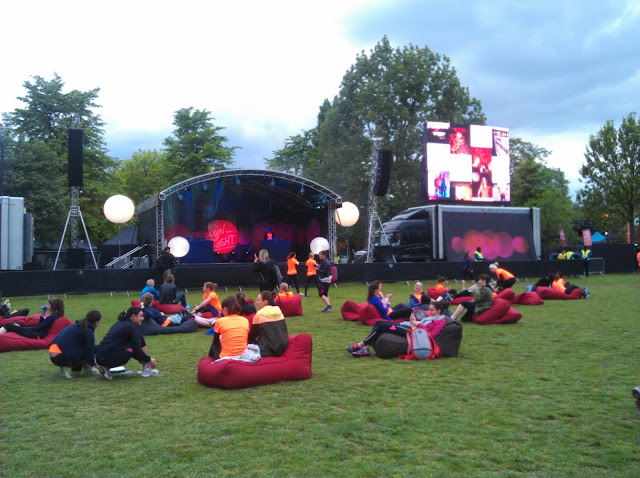 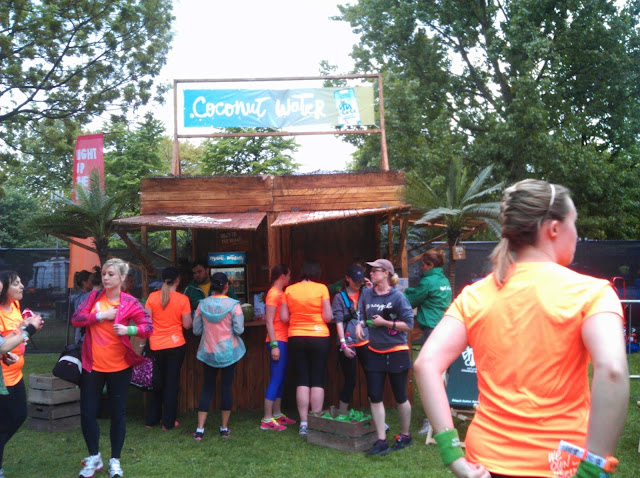 There was a bag drop where I was able to leave my things (including the awesome goody bag Leah organised for her Team Naturally Run members, thanks so much!) – but the queue afterwards was immense, it took me half an hour to get my bags. 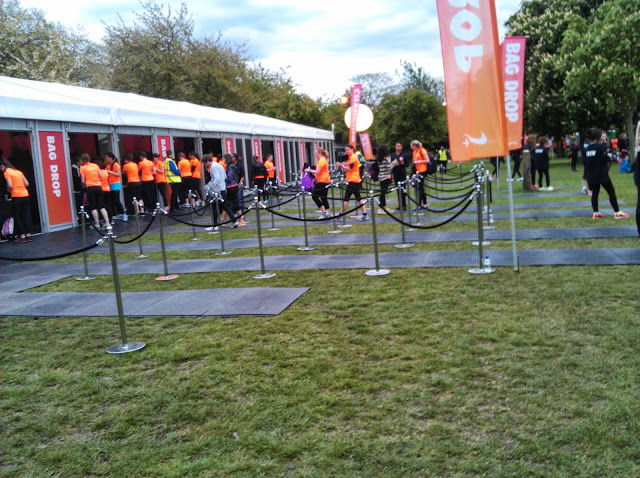 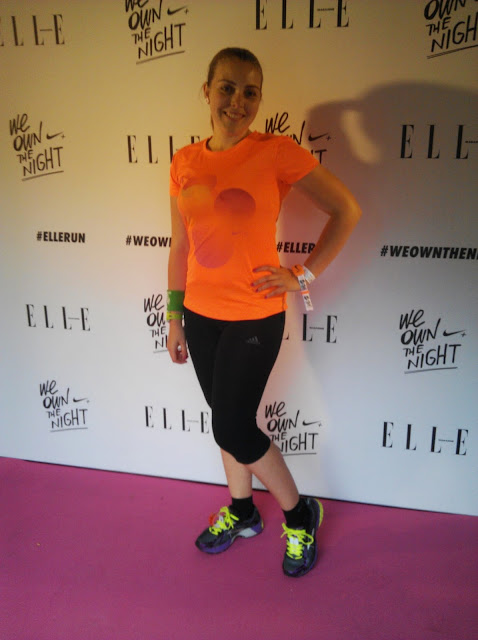 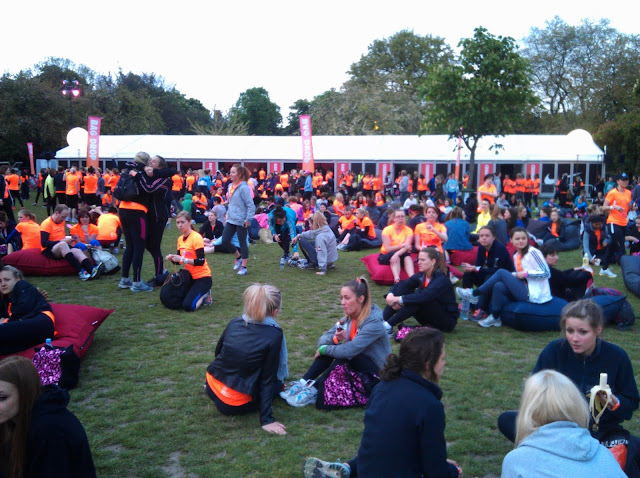 Fortunately there were plenty of portaloos and so come 7:45pm we were all ready for the warm up and chat on stage with Paula Radcliffe and Perri Shakes-Drayton – pretty cool! 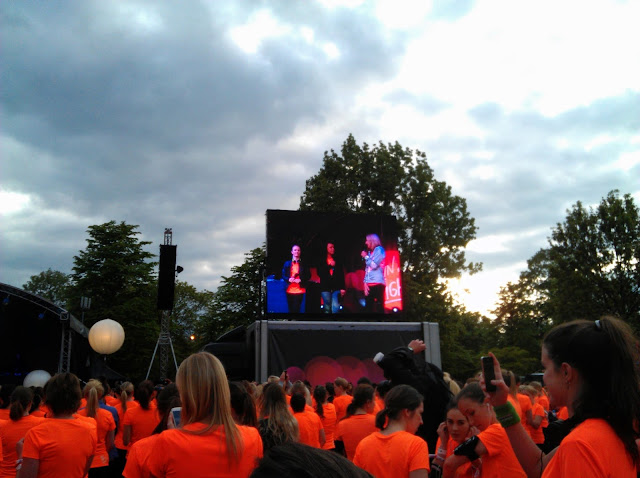 Everyone was handed Nike wristbands when they entered the village which lit up during the race and were supposedly colour-coded according to your goal – nobody actually explained this to me when I was given one however! 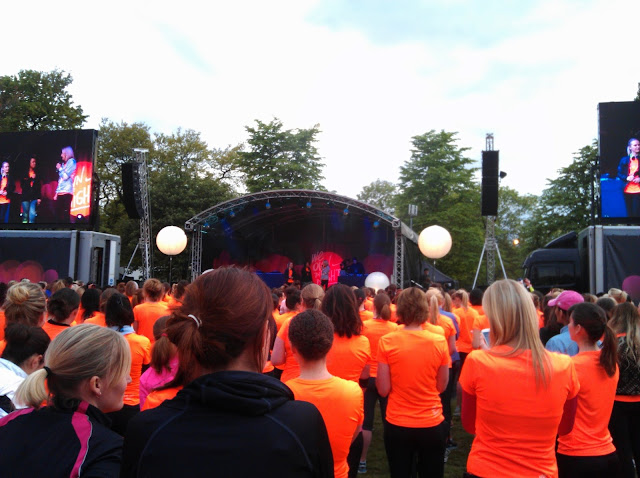 I ended up with orange which it seemed the majority of the field had, with blue for “pros” and pink for “walkers”. With that distinction, nearly everybody had selected orange, and even though there were pacers with signs, there was no explanation or announcement about perhaps standing behind the one with your goal time. Consequently the start was a massive scrum of people of all speeds trying to get through the first few congested corners!
The route was generally good – a lot flatter than She Runs Windsor which was nice! It was 2 laps which I dislike but that’s just a personal hatred of laps! The support was excellent – I saw Leah’s boyfriend taking photos and the amazing RunDemCrew cheering area which really spurred me on. I ran the first 2k without music to soak up the atmosphere, and then plugged into my iPod to settle into a rhythm. There was a fair amount of weaving going on, and due to the laps the paths were divided in half so were quite narrow. There were plenty of water stops however, and with bottles this time which was better – I carried mine with me and took sips to avoid getting a stitch again!
The finish was soon looming and I sprinted the last 100m across the line, gasping and with my knees hating me but a great sense of satisfaction – nobody handed me a drink however, or a medal or in fact anything. I was left to aimlessly wander and join the huuuge queues for my bag. I did manage to grab a bottle of water off someone eventually, and was handed my finishers string “bracelet” but it was a bit of an anticlimax.

However, that all paled into insignificance when I joined the rest of Team Naturally Run outside for a team photo, and heard how their races had gone, hugging and sharing their happiness. Everyone did amazingly and despite the many teething problems for the actual race, the experience and atmosphere is something I won’t forget.