Last weekend I took part in the inaugural Color Run around Wembley in London – a 5k “race” with stations every kilometre where runners are suitably covered in coloured powder until they complete the course looking like a walking paintbox! 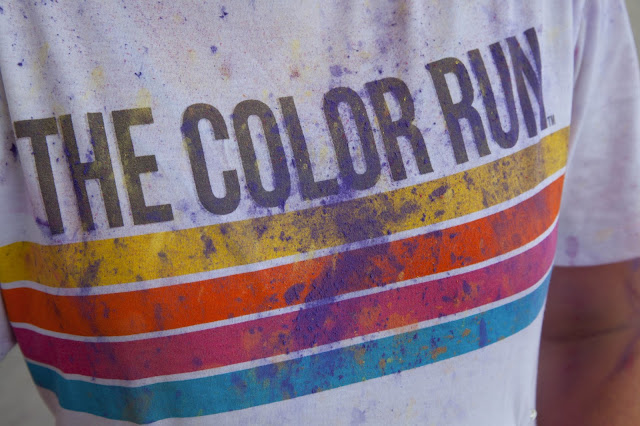 It’s a massive novelty race and you go into it purely for the fun and participation. The race isn’t timed and most people were walking or not taking it very seriously!

At the “colour stations” people threw powder at you although it was quite congested and there weren’t as many people distributing the colour as I thought. You had to stand right in front of them to stand a chance of getting hit, so many people resorted to their own methods of either rolling in the loose powder on the floor, picking handfuls up to throw at each other, or in some cases stealing boxes of colour from the stations and running up the road flinging it around! 🙂

It was a ridiculously hot day, and with over 15000 people taking part, with no particular starting order, there was quite a long wait to set off. 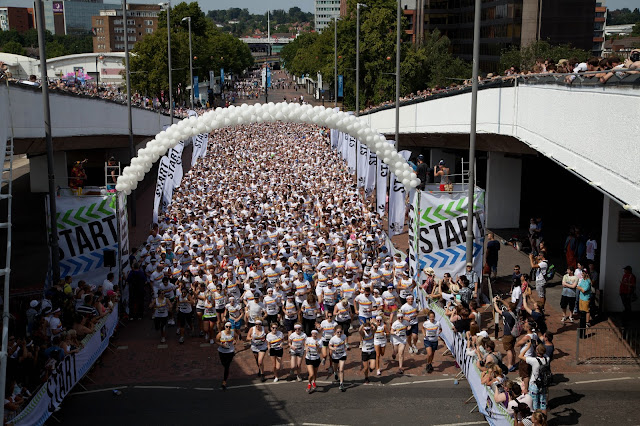 The start funnel was supposedly open from 2:30-4pm with waves of 1000 people at a time, and I was queuing for over an hour before actually running. I had a bottle of water with me, but it was still pretty sweaty!

After we eventually got underway we headed through pink, purple… 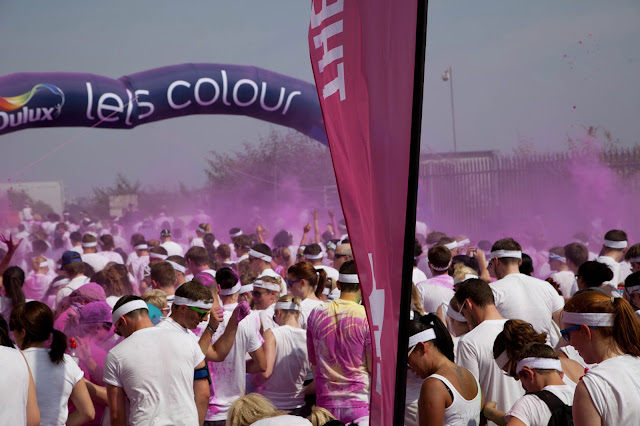 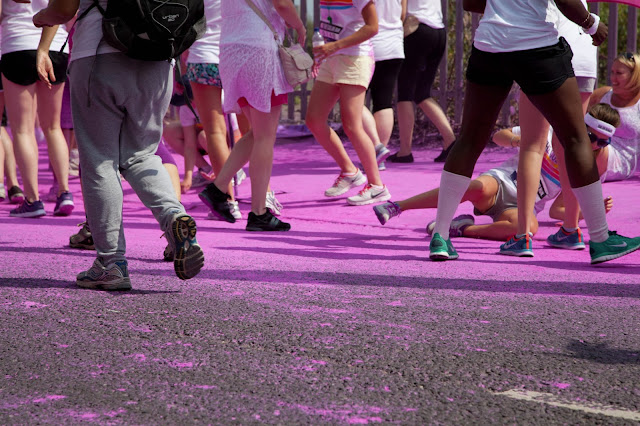 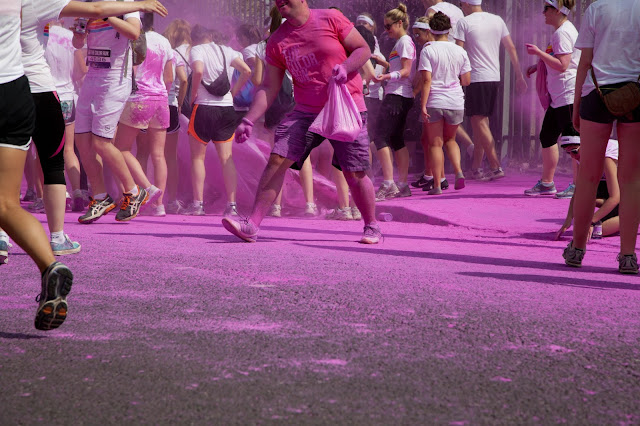 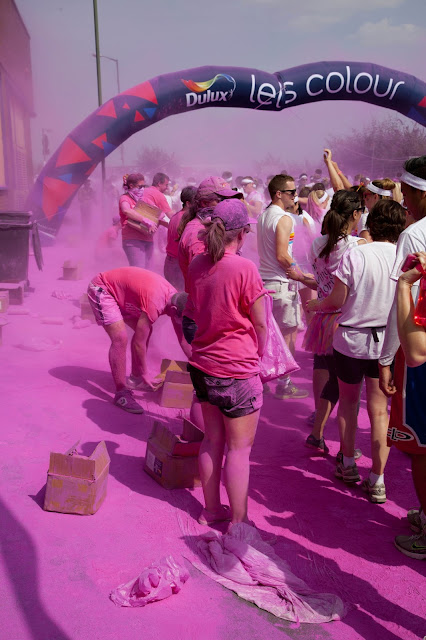 …yellow and orange before making our way back to the finish area. 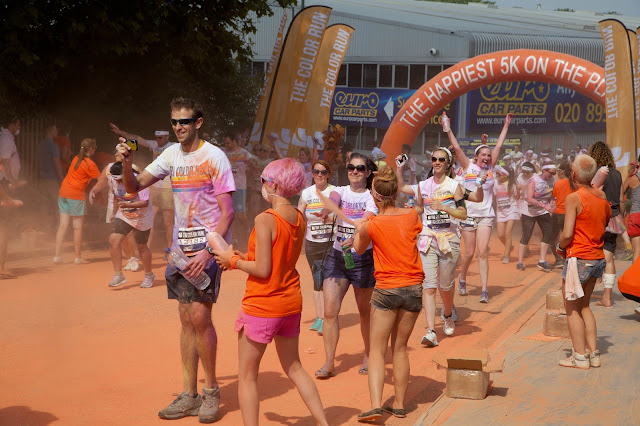 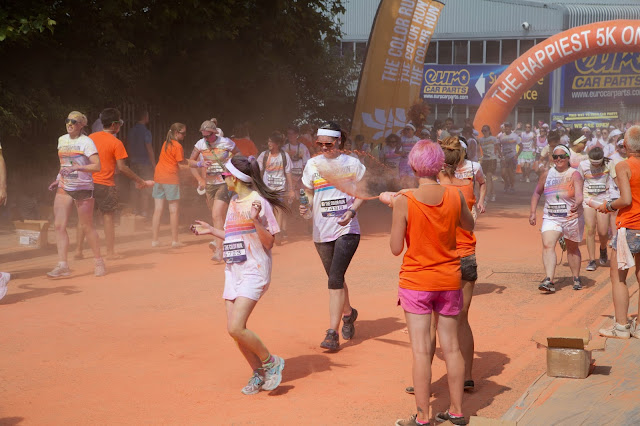 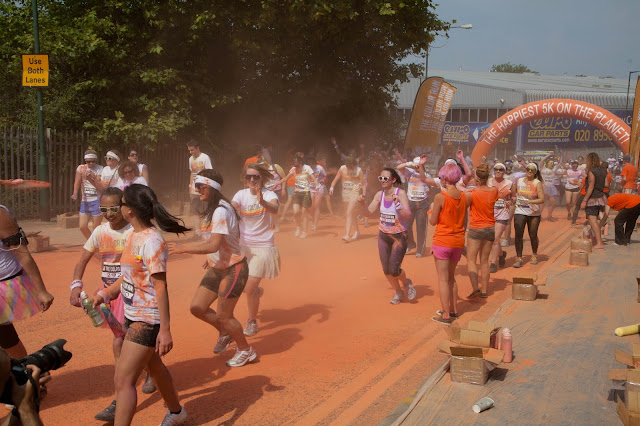 The course was around Wembley Park (starting in a car park…) and then through an industrial estate so not particularly scenic. But I guess they had to find somewhere that could be cleaned up easily! 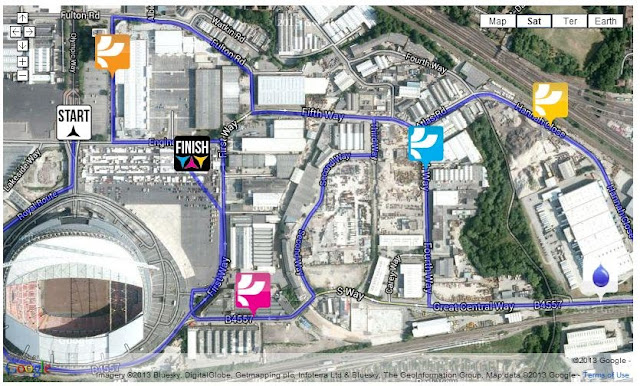 There were hoses at the finish line to wash off the paint, although most people seemed to want to keep it on as some sort of badge of honour 🙂 I did enjoy seeing the train back into London filled with sweaty, grinning, paint splattered people!

The finish line was rather disorganised – I actually ended up walking across the line as it was so congested and had to fight to grab a bottle of water and a Vita Coco. But the after party, complete with DJ and “colour explosions” where everyone threw their packets of powder they were handed at the finish line into the air, was pretty awesome! 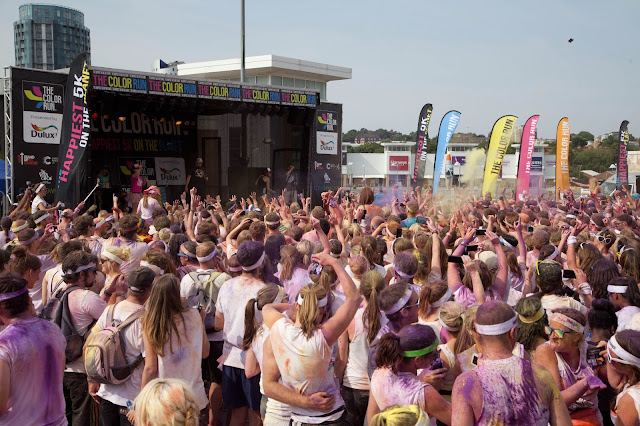 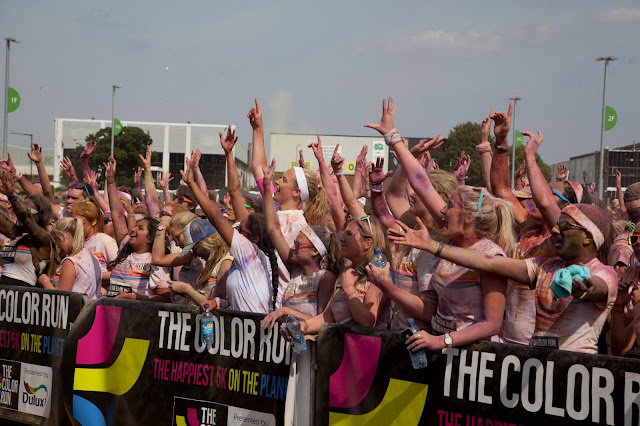 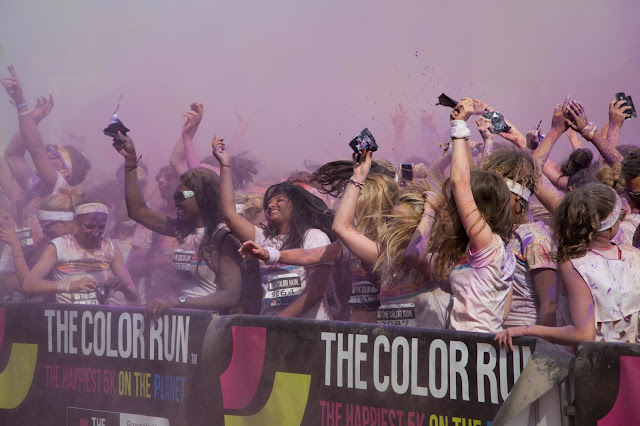 It was a great festival atmosphere! 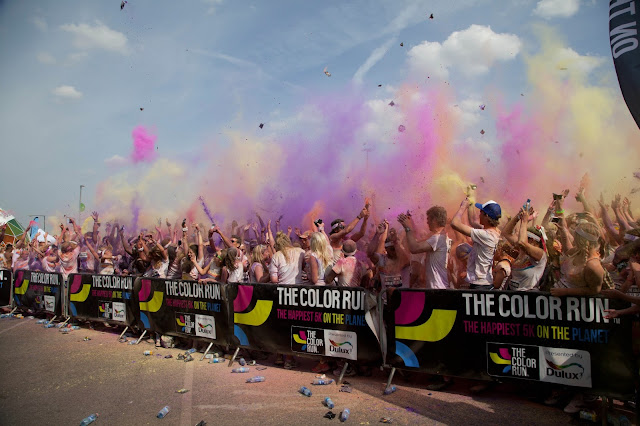 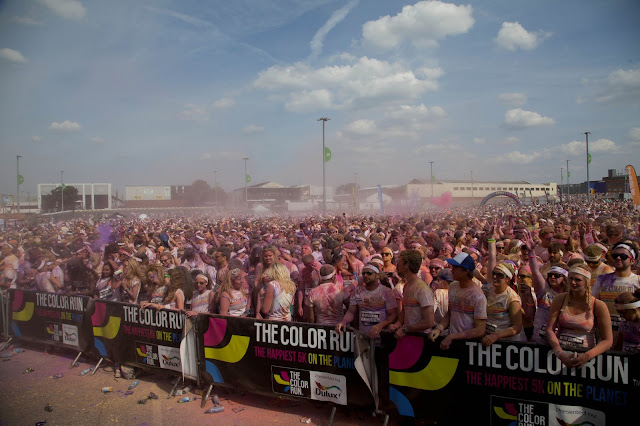 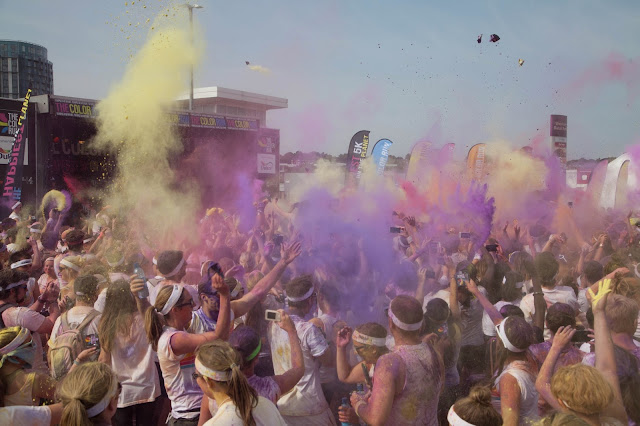 I think I would have been inclined to stay longer if I’d been running the race with someone, but I did it by myself. I knew a few people who were taking part but didn’t manage to spot them in the crowds of white t-shirts. 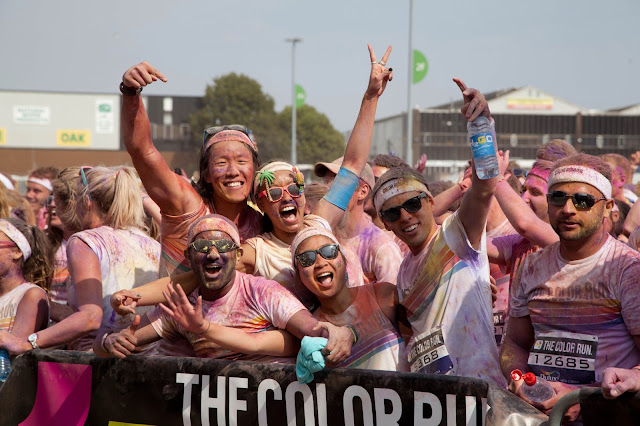 The race cost £30 to enter which is quite pricey, especially considering no medal or goody bag, the congested course and long wait at the start. However this is the first Color Run in the UK so a few teething problems were inevitable, and as I said, you enter it for the novelty and the fun of taking part 🙂 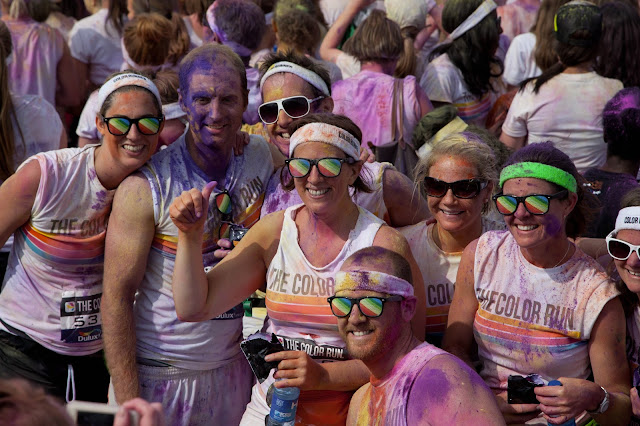 I think the Color Run is definitely a race to do with a bunch of friends, where you can just have a laugh, throw paint at each other and not think about times or pretty views. And definitely bring a bottle of water and be prepared to queue!

There are some more race recaps here:

The Runner Beans
Lunges and Lycra 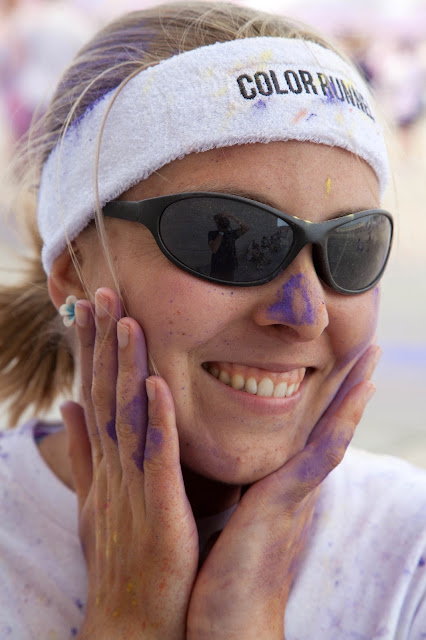 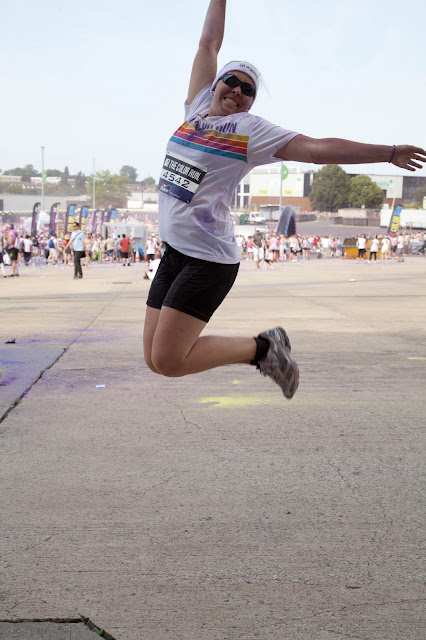 Would you ever do a “novelty” race?