This race sounded a bit strange from the outset – no finish line, just a retired racing driver chasing you in car around Silverstone – and when I turned up on Saturday to sleep in what was a cross between a shipping container and a highly modern sleep pod, the strangeness was simply heightened! 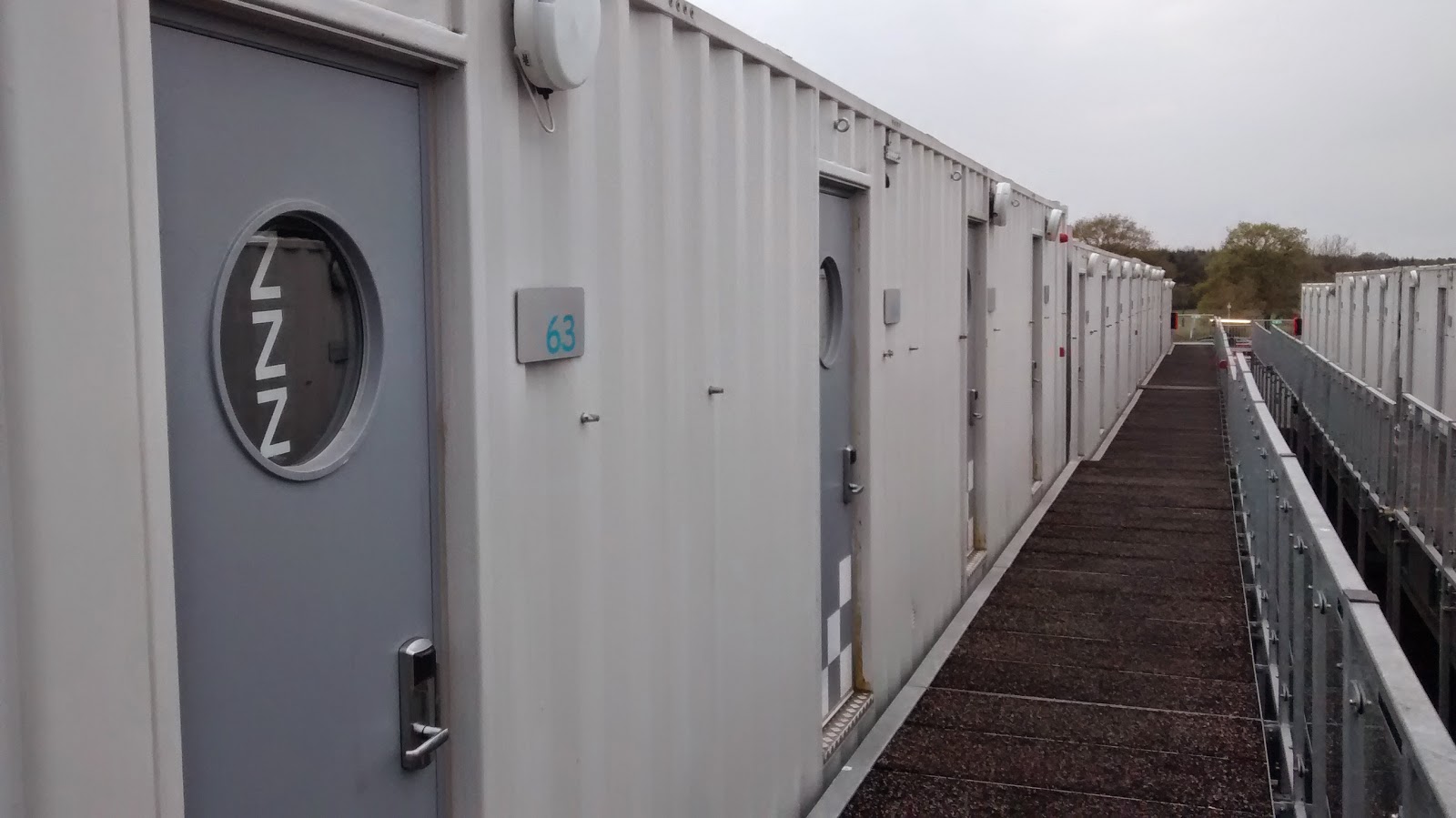 The Wings For Life World Run is a unique concept – a race that starts at the same time in 35 countries around the world, and where the winner is simply the person who can keep running for the longest.
I wasn’t sure how far I’d make it before being caught by David Coulthard – the driver of the Catcher Car in the UK- and decided just to enjoy running somewhere new and not tire my legs too much before Hackney Half next weekend! 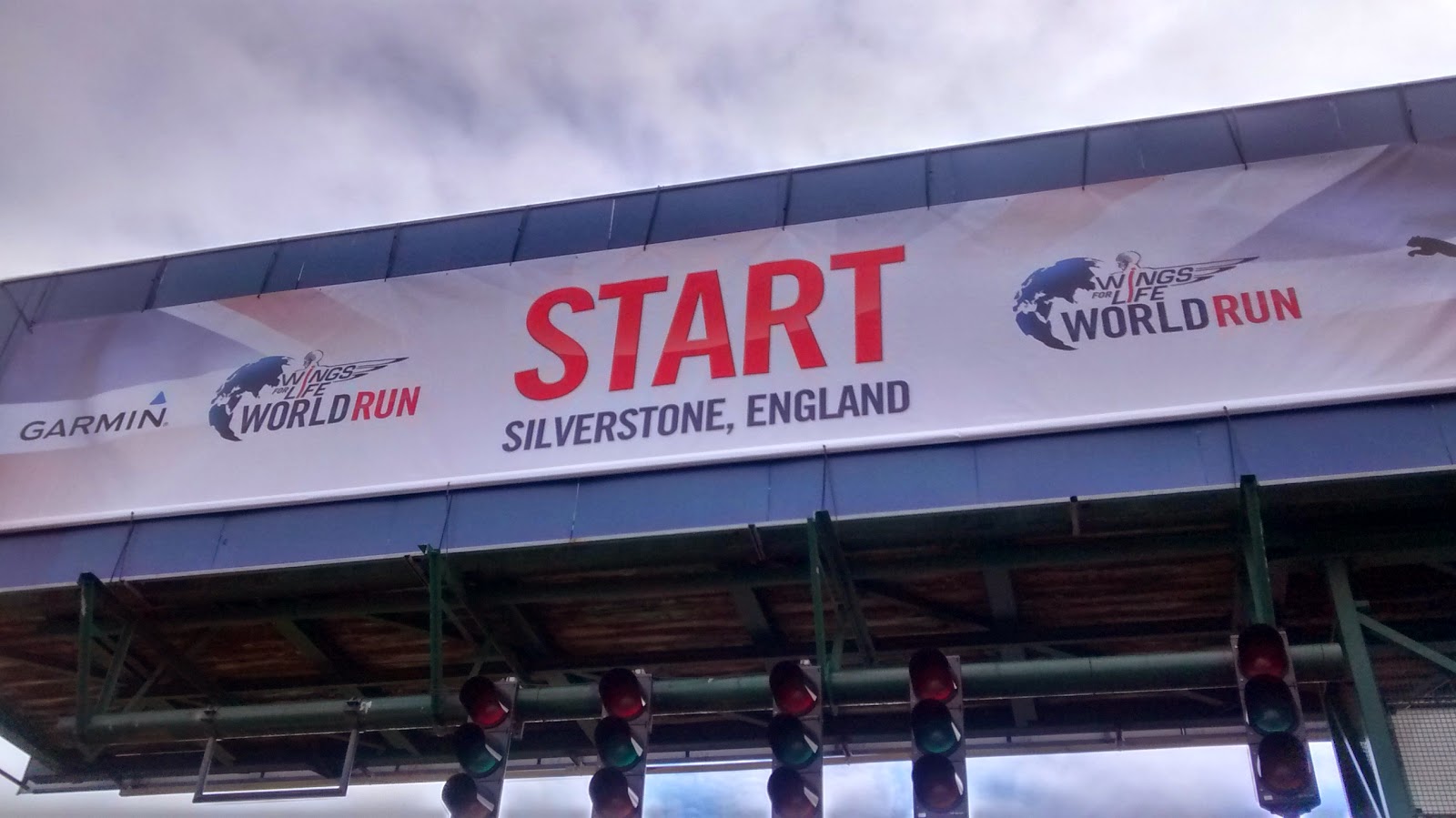 We lined up on the start line at 12pm on Sunday 3rd May, hoping that the grey rainclouds would stay away, and after an enthusiastic warm-up and trying to sneak selfies of Mark Webber set off around the Silverstone track. 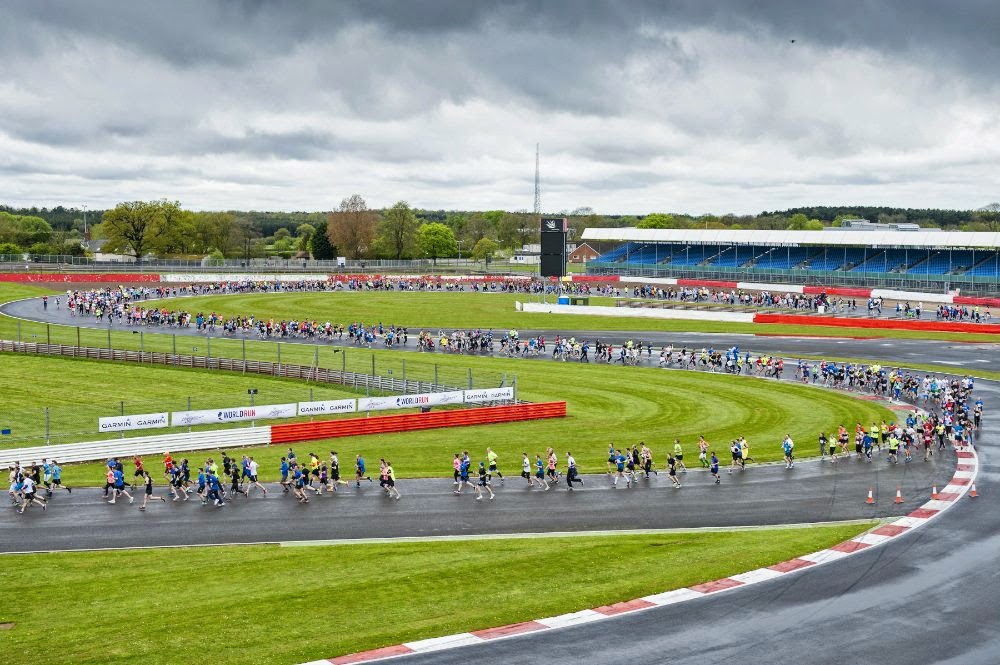 The course took us on 7-8km of tarmac looping past the empty stands and tyre walls, before heading off into the Northamptonshire countryside. 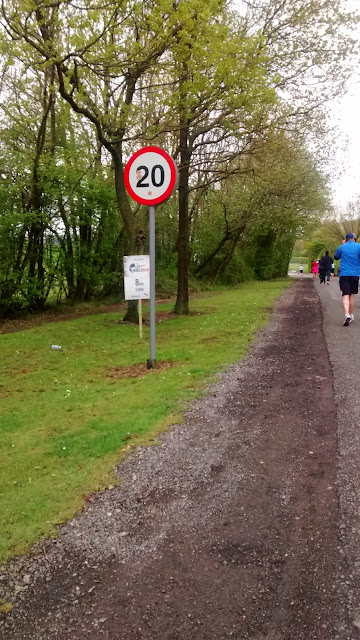 If I’m honest, I would have preferred less running on the track and more chance to explore the winding country lanes, even if they were a lot more hilly!
As I’m a reasonably slow runner (and was stopping to take photos!) I only made it to just before 10k before I heard the yells and the approaching car engine. 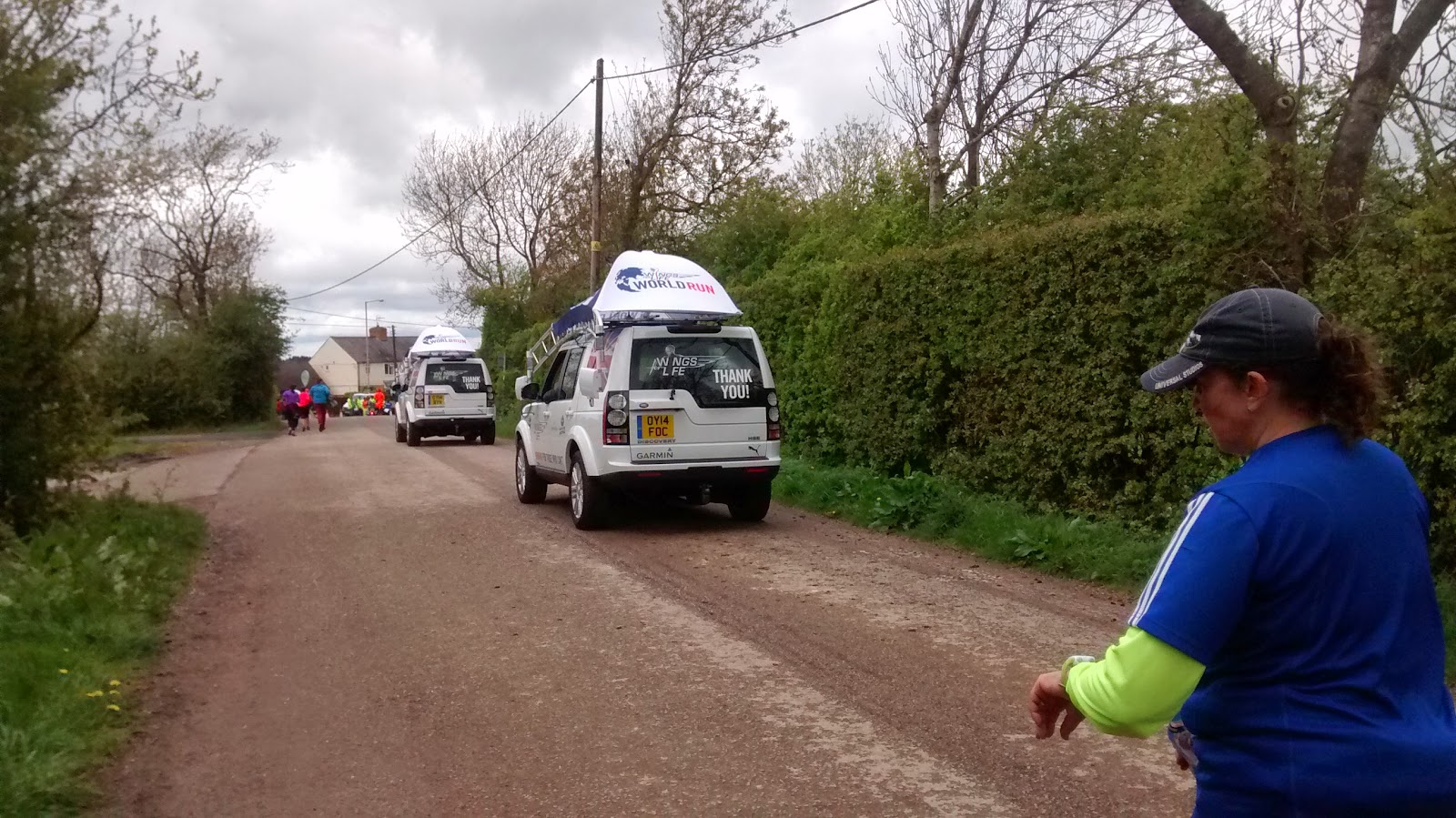 You couldn’t help but want to put on a burst of speed and try to outrun it for a little longer! But before long the cars were pulling past and the race was over for me, just over an hour after setting out. 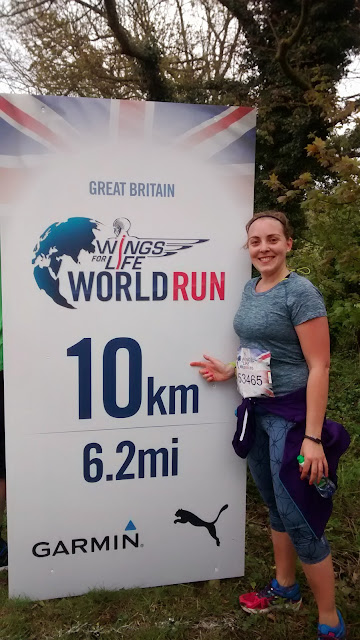 I continued running to the 10k marker, just around the corner and waited with plenty of other runners for a bus to transport us back to the start line.
Everything was ridiculously well organised – we were provided with bottles of cold water on the bus journey back, and were then able to collect our bags from the baggage drop, and were awarded a medal, t-shirt and goody bag very quickly. 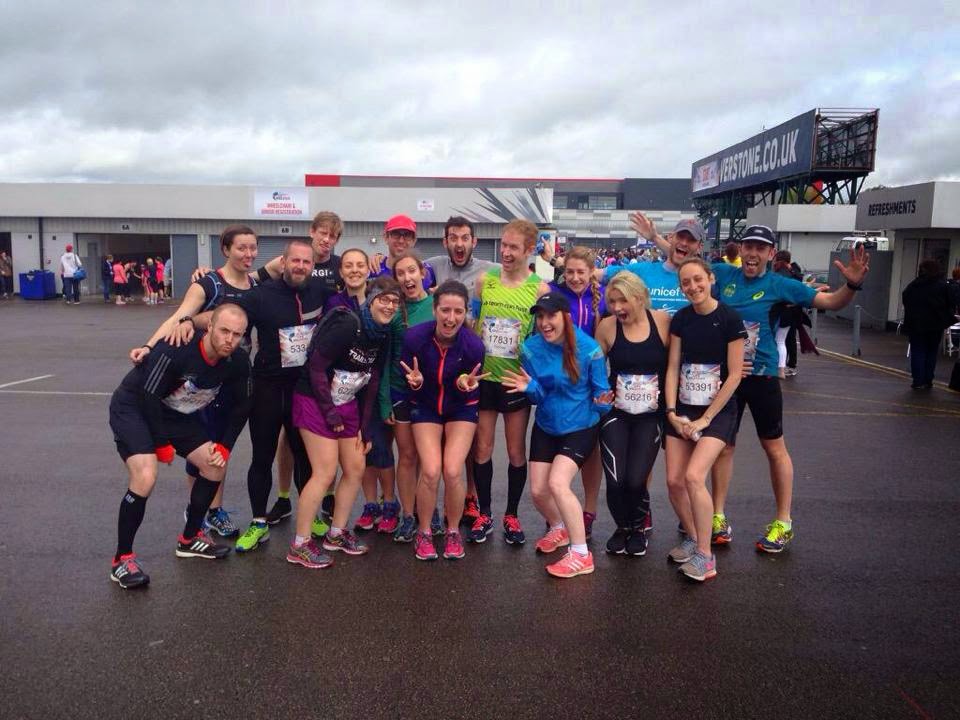 Large screens on the course and at the after party displayed the unfolding race- all runners were allowed entry to this area for free beer, Red Bull and popcorn (?). I relaxed with some other runners from the Red Bull/Freestak team (who had kindly given me the race place) and waited for people to finish and be transported back to Silverstone. 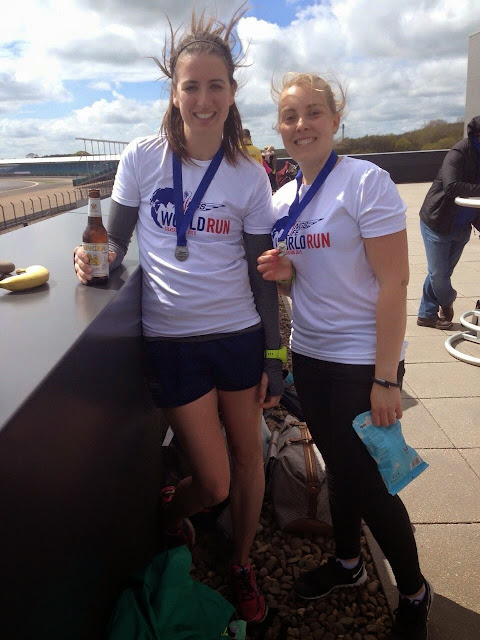 Amazingly, the two UK winners were from our team- I’d only met them for the first time that day, but it was still exciting to be associated with such brilliant runners. The female winner Kate Carter completed an awesome 35km in 2hours 39minutes, after running the London Marathon the weekend before! And Tom Payne, who ran an epic 61km in 4hours 10minutes came a very impressive 23rd overall in the world. 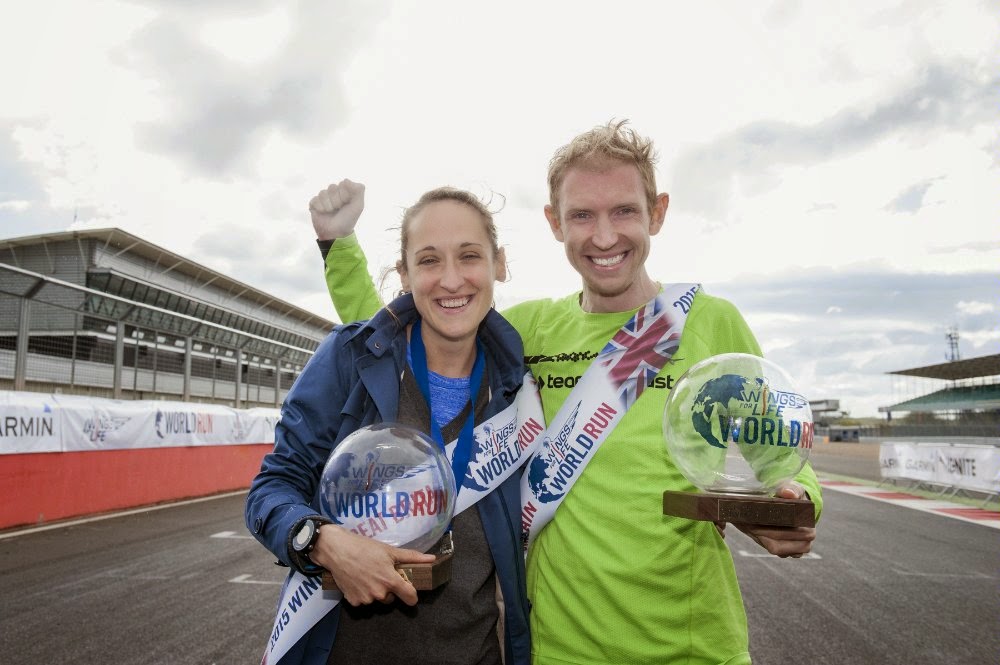 Bizarrely, the nature of the race where the winner actually finishes last, meant that the race circuit was very quiet, with barely any spectators by the time the victors returned. It also meant a long wait for those of us who only jogged a casual 10k! For future racers, I’d suggest packing plenty of snacks!
I enjoyed racing somewhere new and the novelty factor of the race was exciting – the setup meant that people who just wanted to complete a few kilometres on the track could take part alongside ultramarathoners. If I were to run again, I would want to try and improve my speed beforehand so that I got more chance to run on the scenic country lanes before being caught! 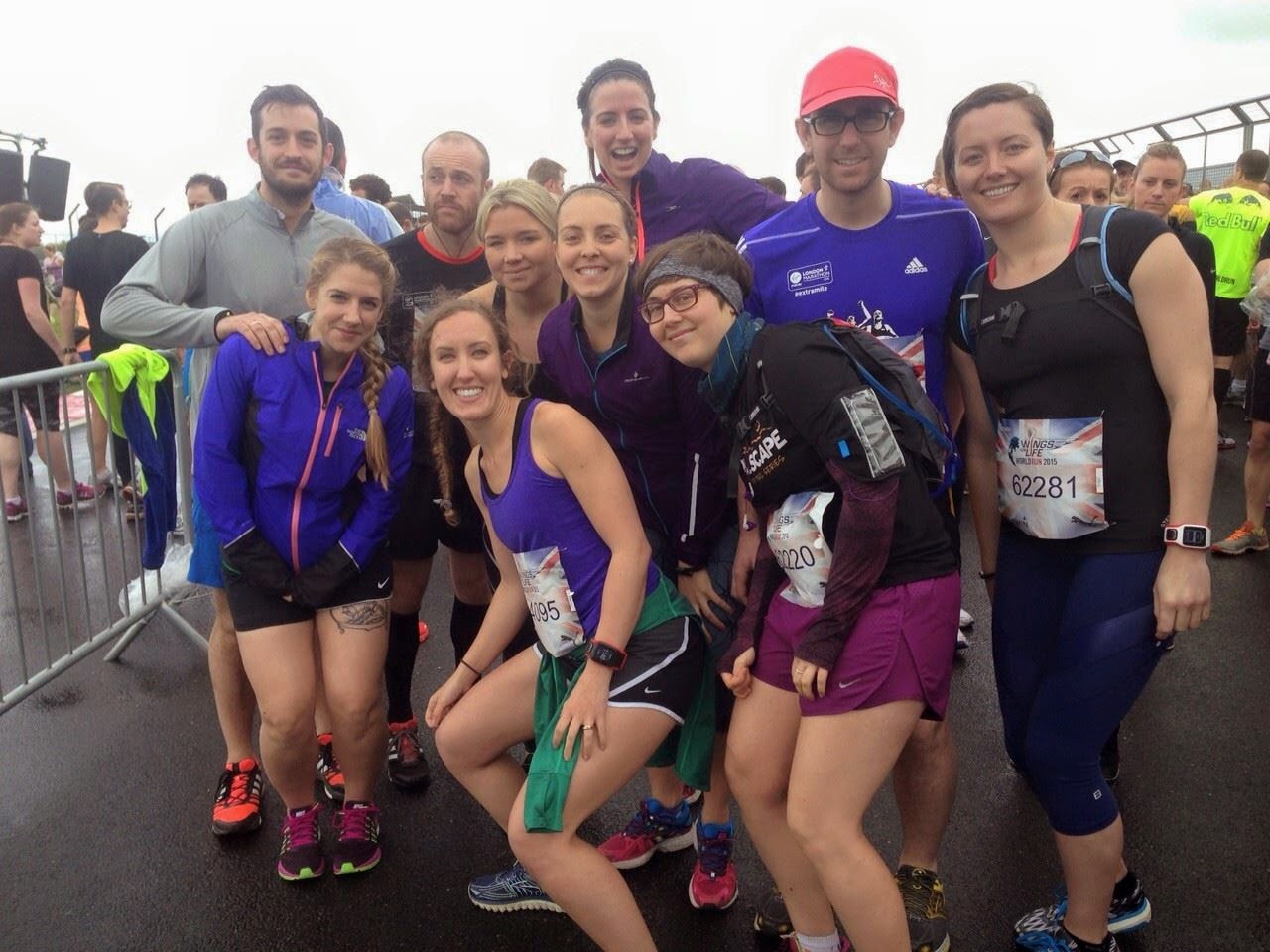 Thanks to Freestak and Red Bull for inviting me along, and congratulations to all who took part!
100% of the race proceeds go to the Wings for Life charity, which funds world-class research aimed at finding a cure for spinal cord injury. All of the entry fees were contributed to these life-changing projects, with Red Bull covering the administration costs.
Do you like the sound of racing at Silverstone and being chased by David Coulthard?  To pre-register for the Wings for Life World Run next year click here.
Check out the video below for a recap of the race day at Silverstone.

NB: Photos courtesy of Red Bull and other team members!