I don’t think I’ve ever started a race so near the front! I felt like a bit of a fraud. 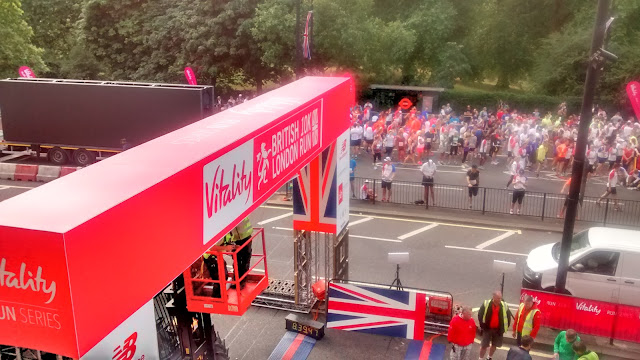 Having been given a VIP blogger place for the Vitality British 10k, I enjoyed a buffet breakfast in the smart Cavalry & Guards Club, had more photos taken of myself than ever before, and danced along to the warm-up on the balcony! 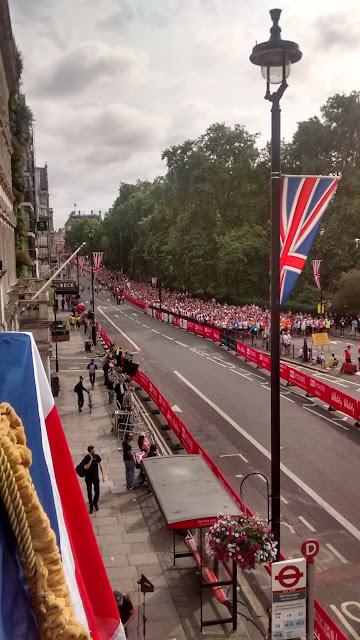 10minutes before the 9:35am start, Mollie and I headed downstairs and lined up on the start line – so close to the front I could touch the starting archway! After all three verses of the National Anthem and a speech from the Westminster mayor (very British), we were off! 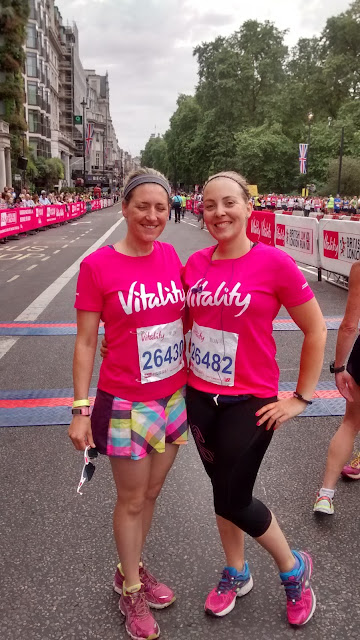 Being at the front with all the proper elites, I definitely went off quicker than I should and for most of the rest of the race was overtaken by everyone! However, with the 15th anniversary route billed as the worlds greatest, passing numerous iconic landmarks I was definitely not in it for a PB and opted to take my time and snap some photos.
The course was very out-and-back, which was great for passing friends on the other side of the barriers, and good for spectators too – we ran through Piccadilly Circus past Eros three times! However, I didn’t realise how undulating the centre of London was, and watching runners on the next part of the course tackling another incline, that you knew would be coming your way soon, was tough. At least I knew when they were on a downhill I’d get that soon as well! 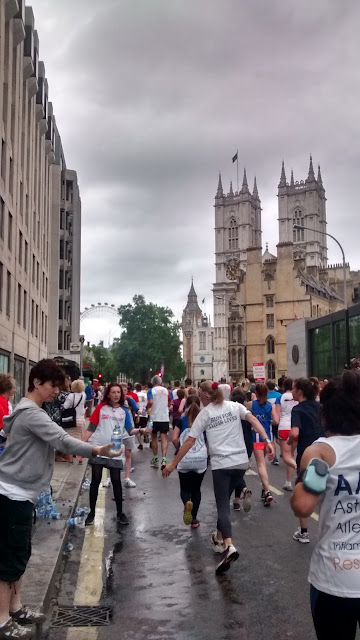 There were huge kilometre markers along the route, and water stations fairly frequently too although I did think they could be better spaced – nothing until 5km, and then 3 in quick succession. Still, at least the weather wasn’t the 30degrees it has been in the last few weeks, and the rain that was falling when I left the house stopped too – not bad planning British weather! 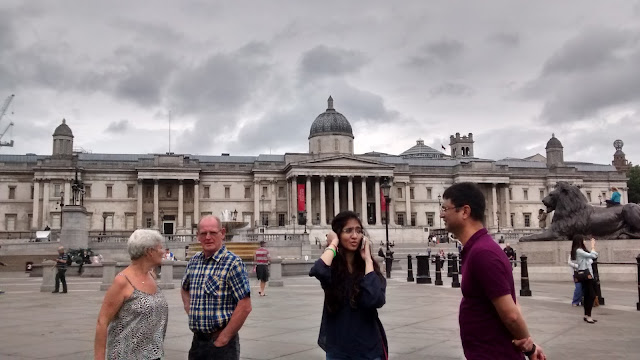 We ran along Regent Street, doing a bit of window shopping, and passed Trafalgar Square before turning onto my favourite part of the route – this involved running past the finish line on the other side of the road (cruel!) but at 8km we ran around Parliament Square past Westminster Abbey, Big Ben, and some beautiful London architecture. 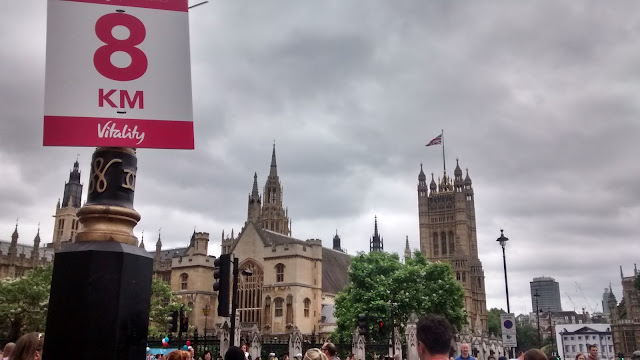 I made sure to stand to the left of the road to take my photos, and tried not to trip anyone up- the route was pretty congested and while London has a good “stand on the right, walk on the left” system on the Underground escalators, there was no such rule with this race – runners were darting all over the place! 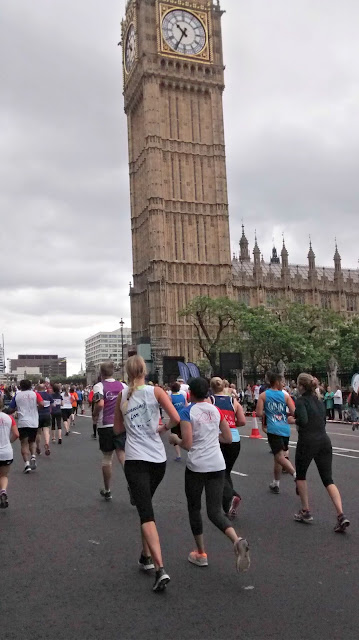 Powering down the finishing straight I crossed the line in almost exactly 1hr15minutes – definitely not fast, but for a scenic tourist run not bad either. After passing under the arch, runners were directed to walk down Pall Mall with little instruction as to what was going on- unfortunately this is where the race really fell down for me. 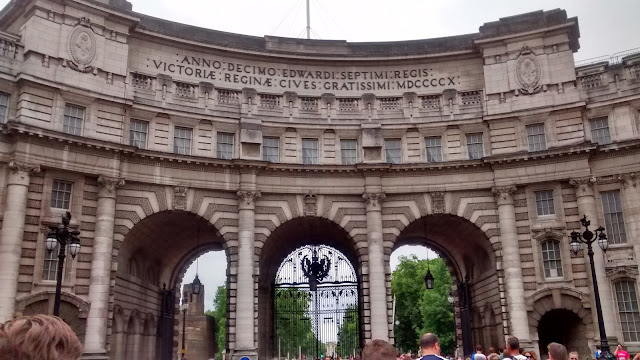 It felt like we were wandering a little aimlessly and although I eventually made it to the baggage drop in Waterloo Place, there was huge congestion with hundreds of people queuing at a tiny stall for medals, still wrapped in plastic cellophane. Fortunately my bag was in the VIP Vitality tent so I didn’t have to wait for that, and was able to grab a bottle of water, but there was nothing else on offer for runners – no snacks, bananas or goody bag. It felt like a little bit of an anticlimax really! 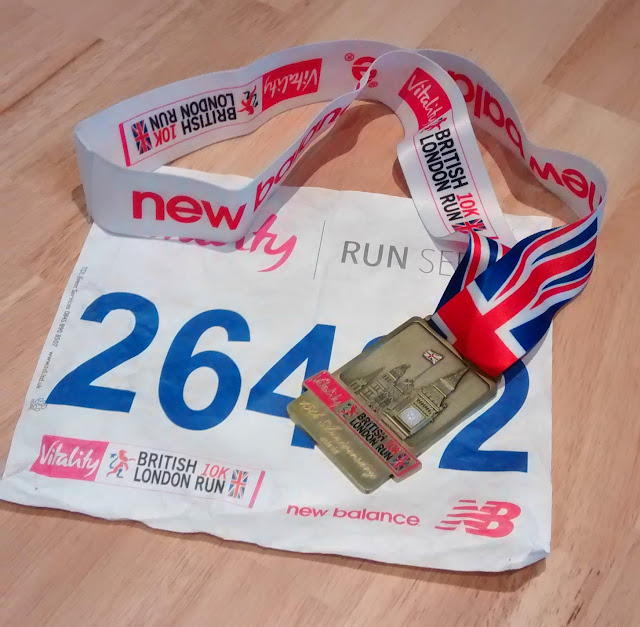 Did you race this weekend? What landmarks would you love to run past in London? And what’s the worst thing you’ve experienced at a race?

NB: I was given a free race entry by Vitality in return for blogging about the event. However, as always, all opinions are my own. Vitality, the health and life insurance that rewards people for being healthy, is the title sponsor of the Vitality British 10k London Run and is one of nine events in the Vitality Run Series.