My First Half Marathon! {Windsor Trail Half}

It’s hard to sum up the culmination of several months training into one blog post. Especially as right now, it hasn’t really sunk in.
I ran a half marathon last Sunday!
I won the entries to the Windsor Trail Half last November, and having convinced my brothers to run with me, January to May were spent slowly building up the distance (interspersed with fun events such as the Geneva Race Weekend and a muddy ten miler with my brother!)
Sunday ended up being a uniquely sunny hot day sandwiched between two grey rainy days- seems like the weather gods were smiling on our first half marathon anyway!
An early taxi ride and train journey and my brother and I emerged in Windsor, made our way to the race village and immediately joined the toilet queue! Unfortunately there were only about 6 portaloos for over 1500 runners and we spent a good half an hour inching our way closer.
One of my brothers had forgotten his race number (doh!), but was able to pick up another pretty easily, and after making a hasty trip to his car to dump our bags (there was a baggage drop tent as well) we jogged to the start line. This was well signposted across the northern side of the river to the race village, and we stood in a field listening to a pre-race briefing that mainly involved being told to avoid fallen trees!
We were the last wave of half marathon runners to set off, around 8:55, which meant the paths were pretty quiet and we were able to settle into a rhythm and enjoy the scenery with no crowd-dodging. 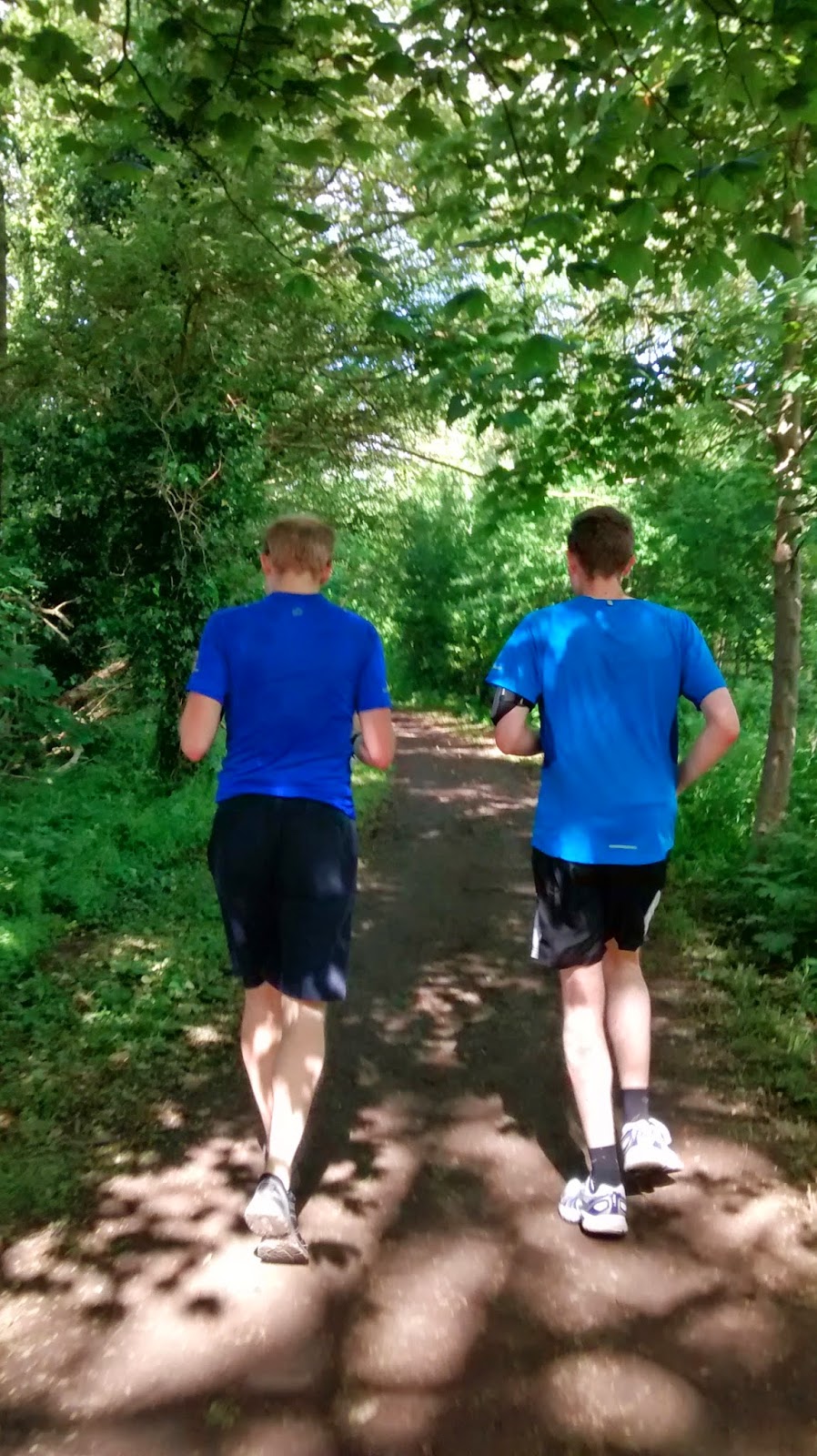 I love running next to the river, and in summary the half marathon route was gorgeous and scenic for the whole course, bar a short stretch on a road bridge to cross back over the river near the finish. 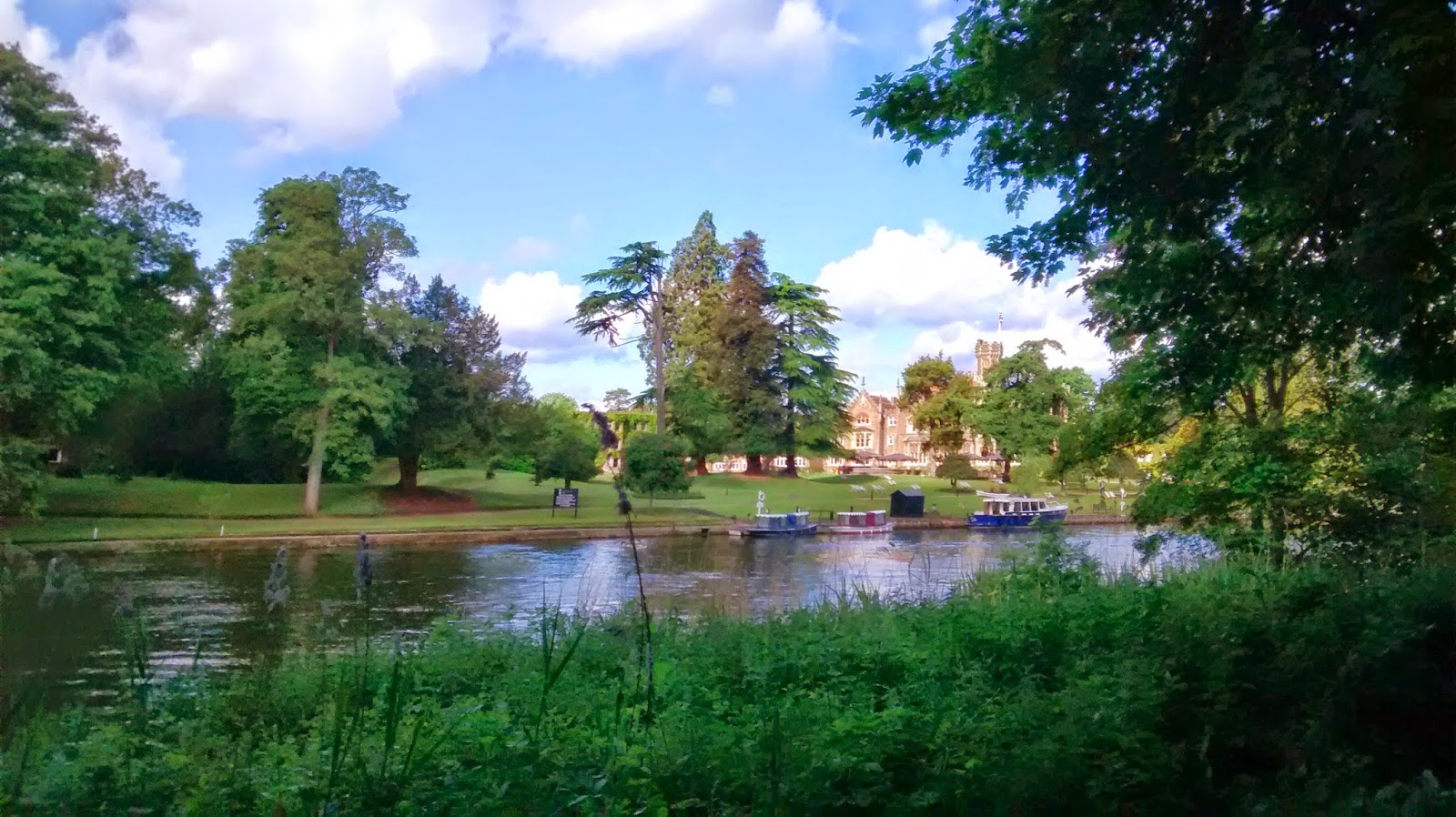 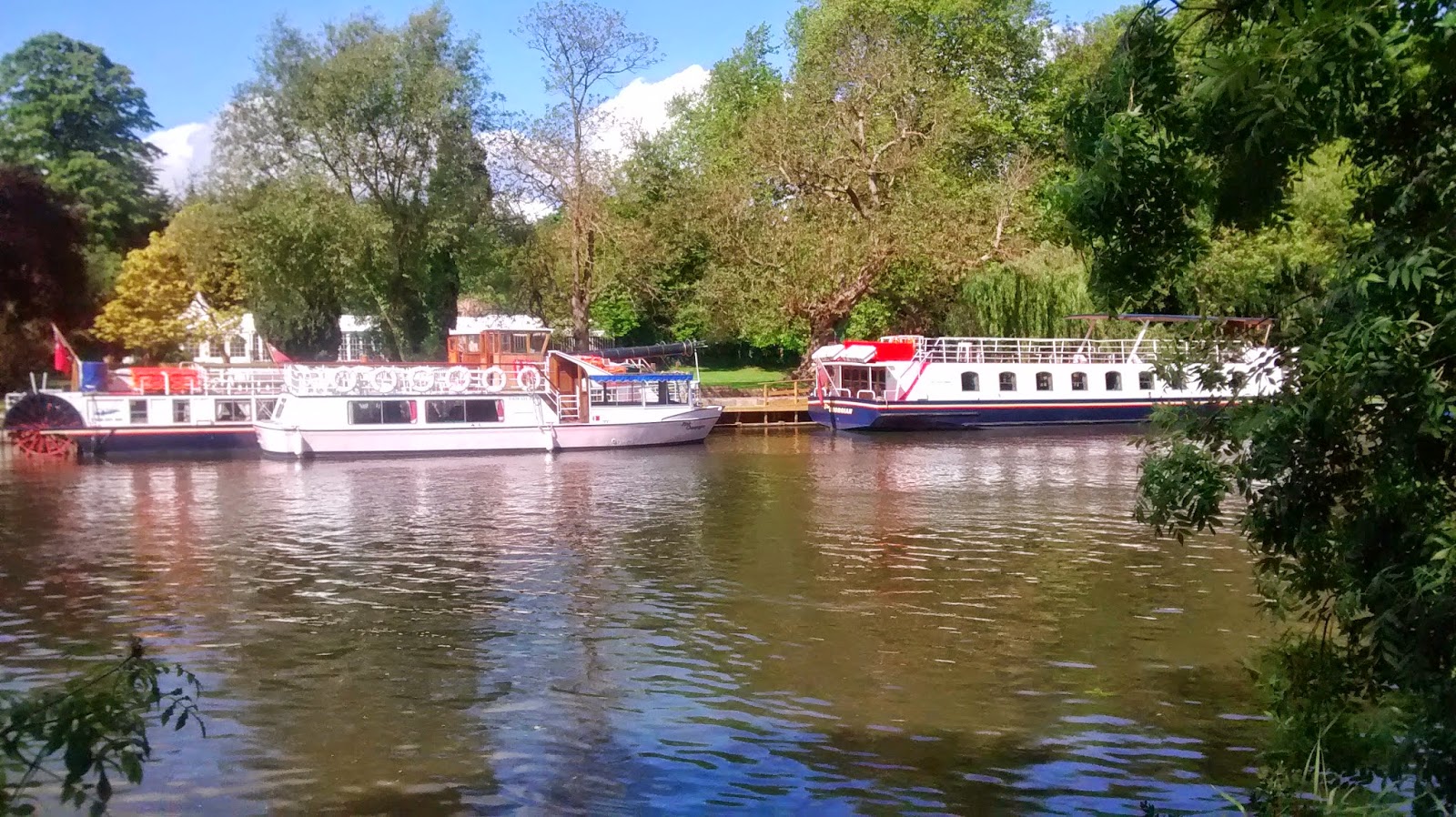 It was a lovely day, although hot, and I made sure to take a cup of water at each fuelling station as well as drinking the High 5 I had in my water bottle. 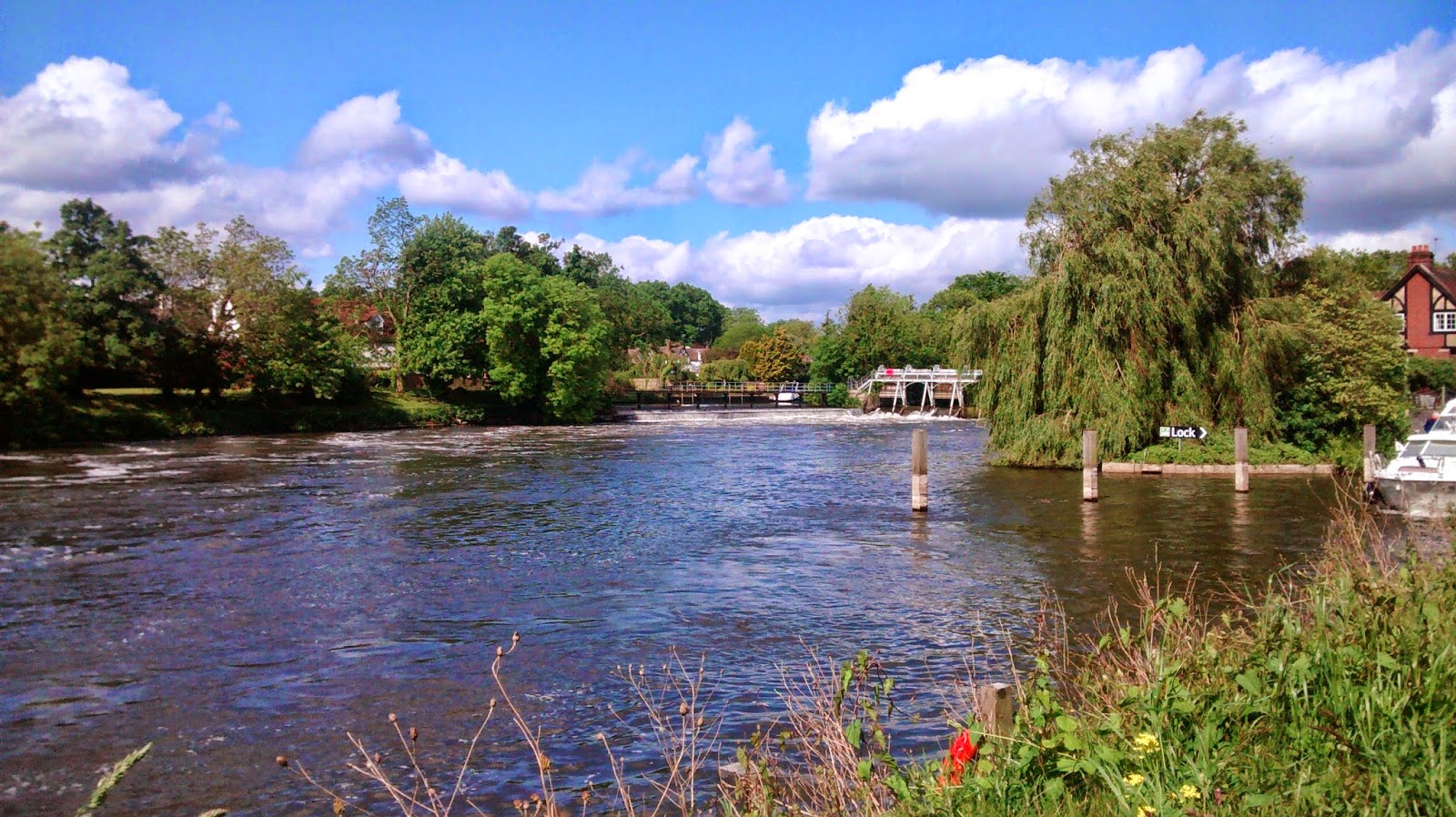 I also took Gu Salted Caramel gels at 1hour and 2hours which along with my usual banana peanut butter porridge for breakfast, meant I felt well fuelled … 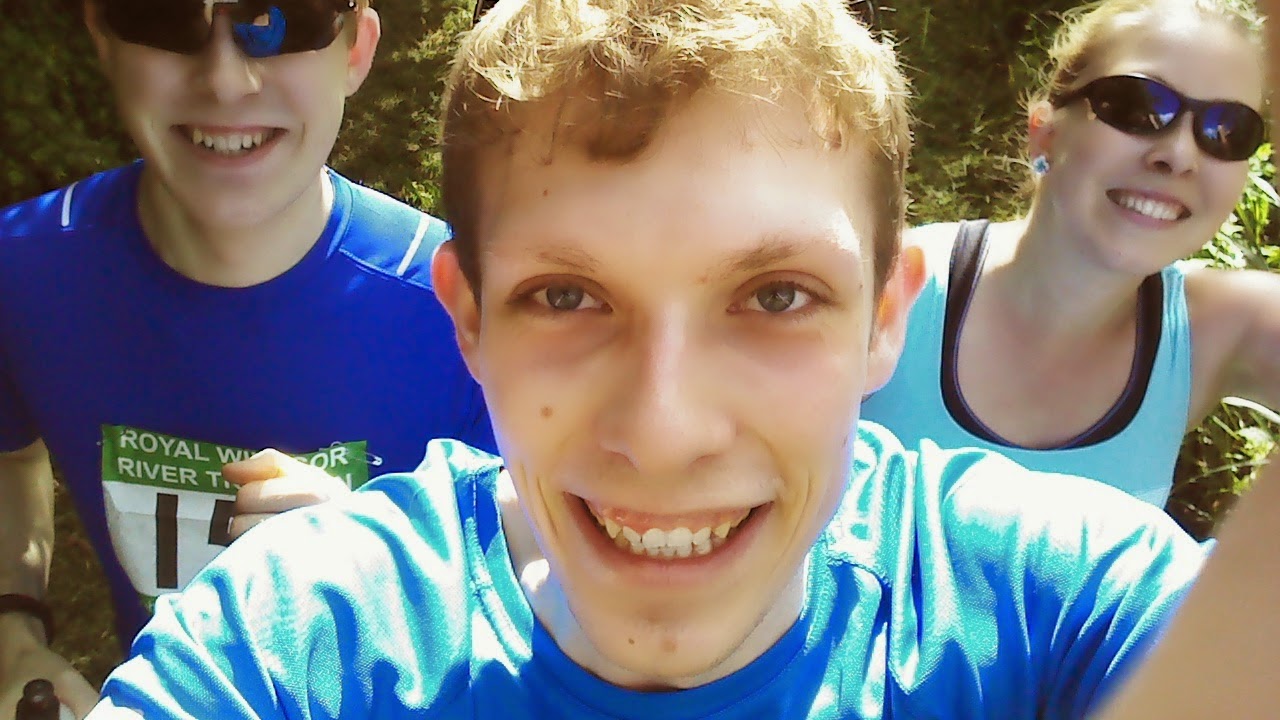 My brothers and I had decided that we would run the whole race together and therefore made sure we stuck to a pace we could all keep up with, taking walking breaks as and when needed. After my recent hip niggles my legs were feeling good, and  I made it to around 8miles before needing a quick music boost! 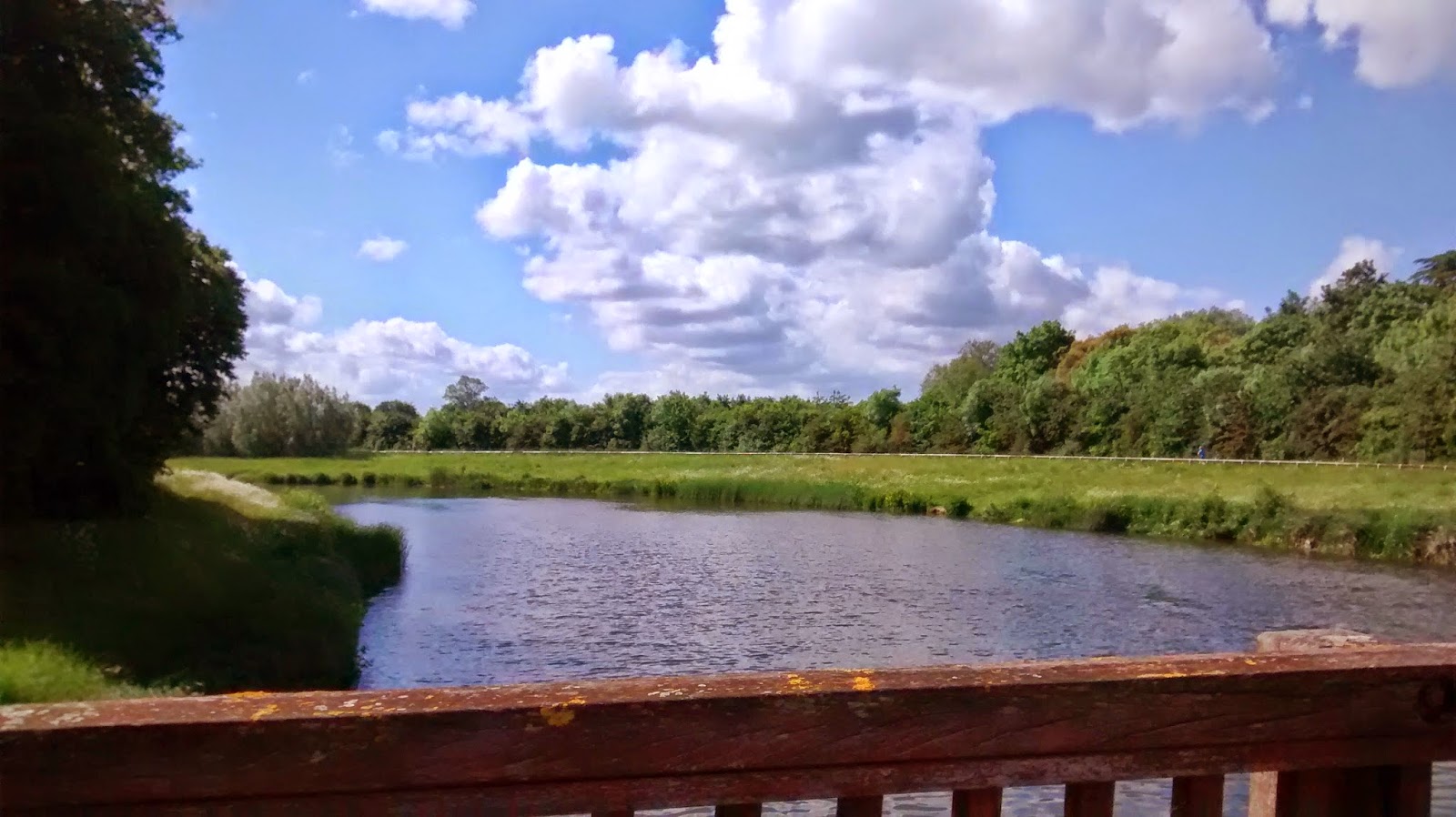 I also amused myself taking photos along the course, including a few obligatory race selfies- an art that needs some practise! 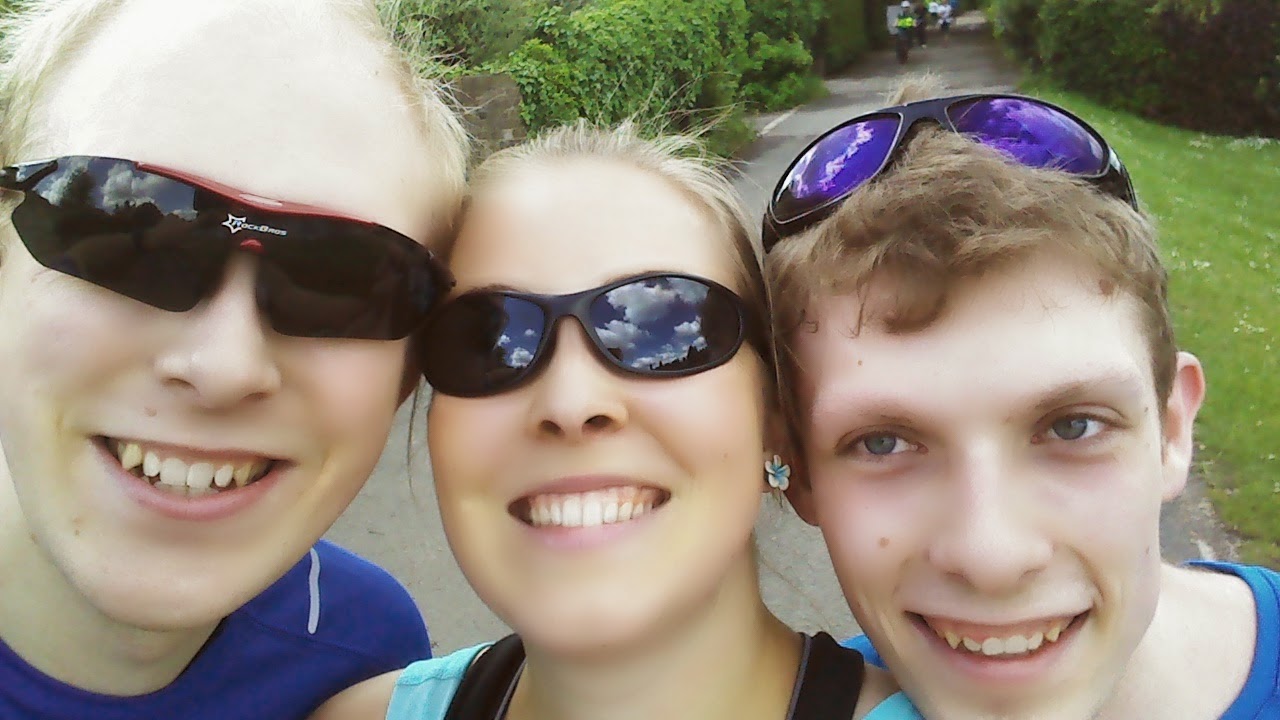 Running with my brothers definitely made the race for me- although the course was gorgeous, in all honesty I think it may have been a little lonely for a first half marathon if I’d been running it by myself. We chatted all the way, encouraging each other, high fiving at the different kilometre markings (a little confusing for someone who’d trained in miles!) and generally making sure we enjoyed the whole thing.

That was our aim after all, to finish the distance and make sure we have a good time 🙂 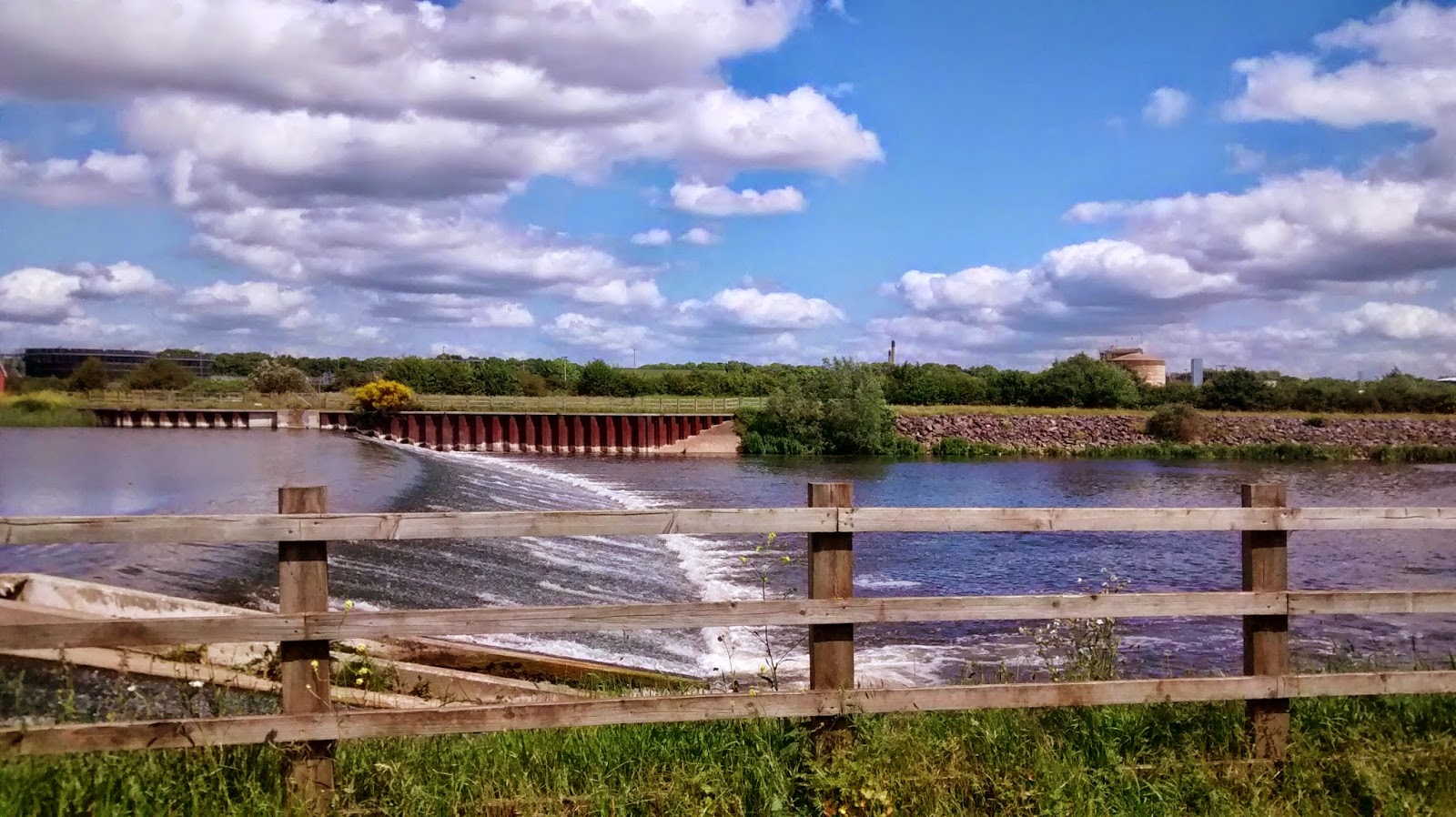 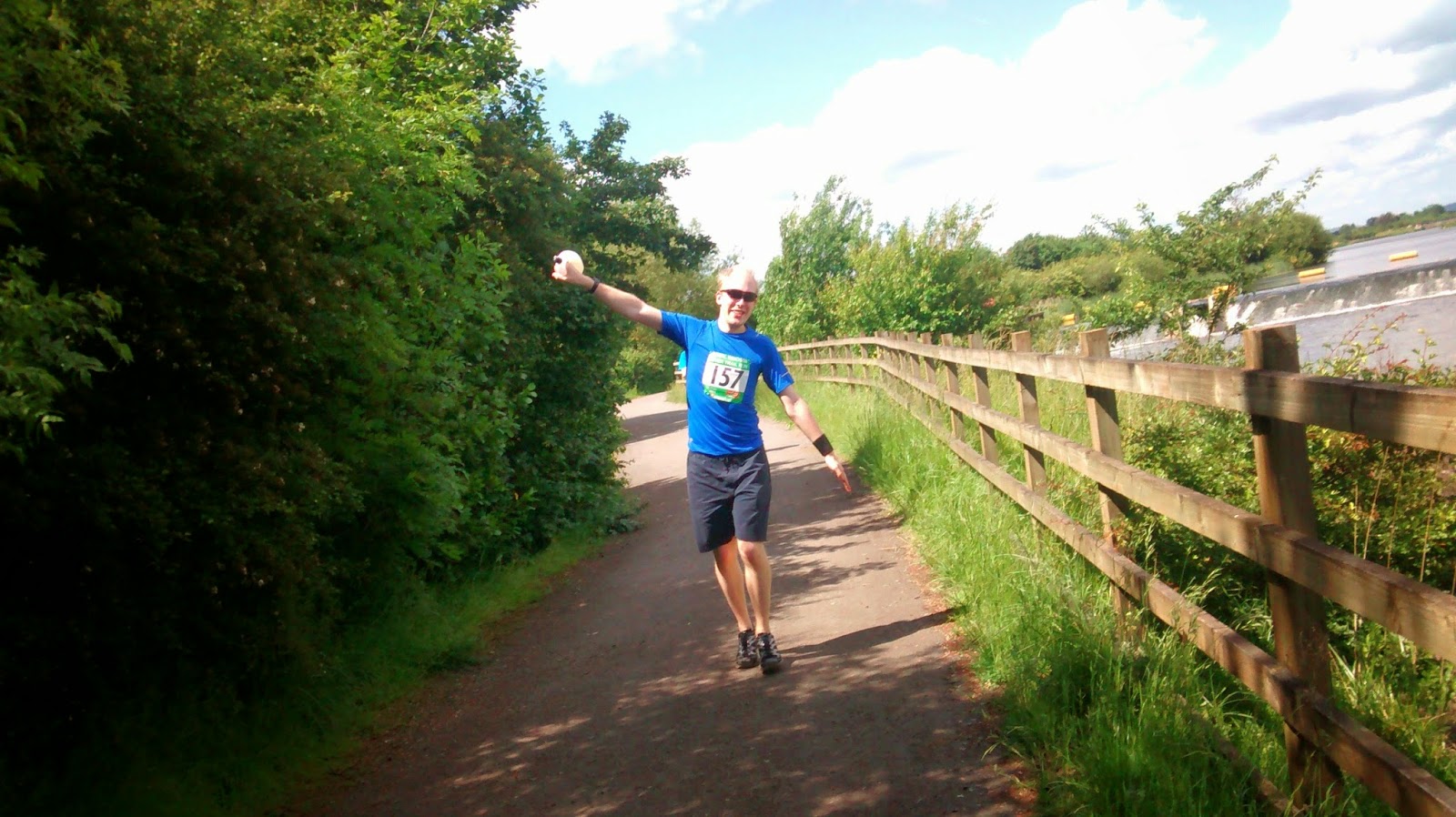 I definitely feel we did that! 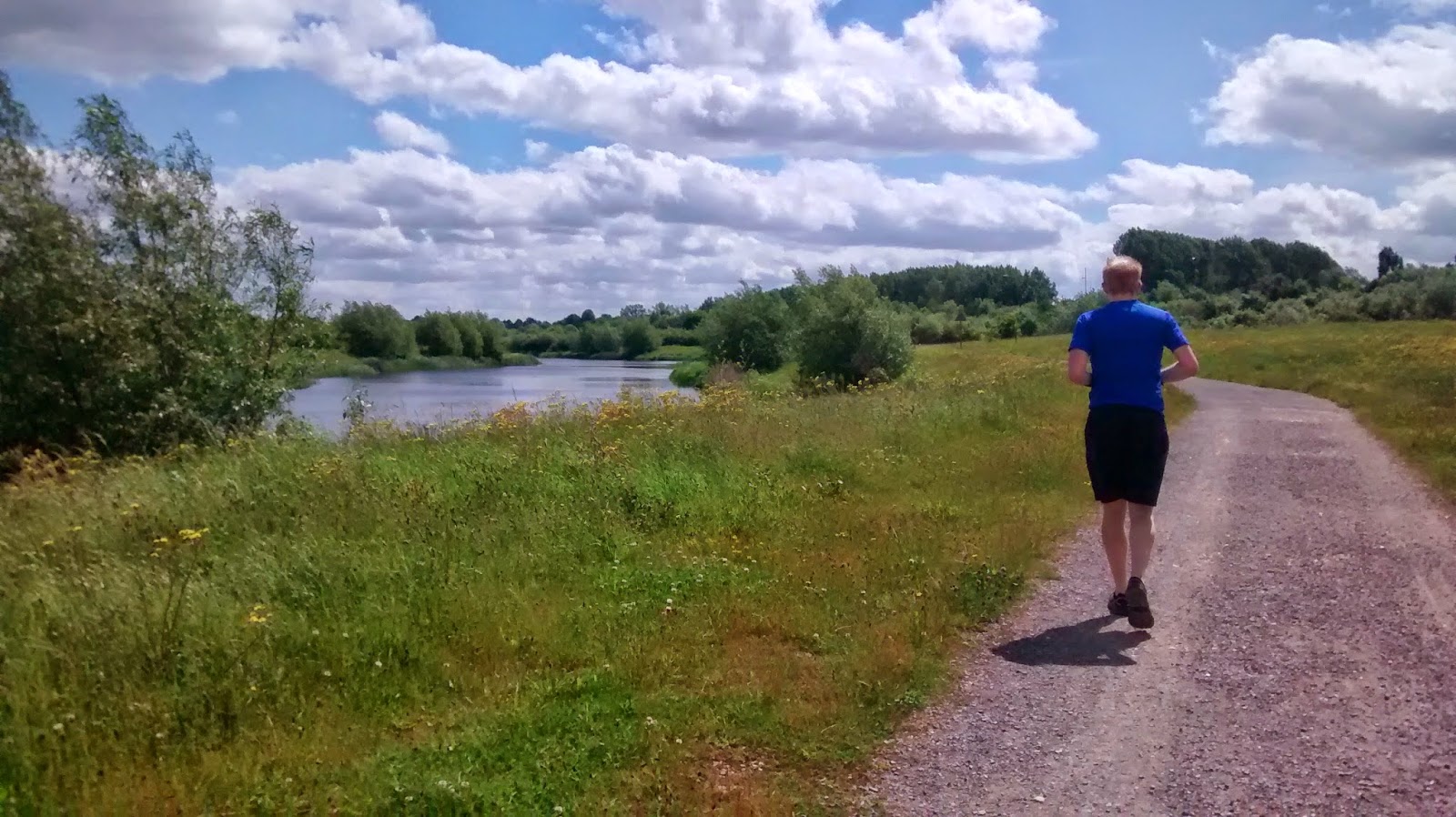 As the last few miles ticked by, my hips and hamstrings were getting pretty tight and I could feel my stride getting shorter and shorter. My youngest brother was also struggling a little, the ten miler we did together being the only long run he’d completed in his training (as a trainee policeman working shifts he didn’t manage to fit a lot of runs in). But we were determined to cross that finish line together! 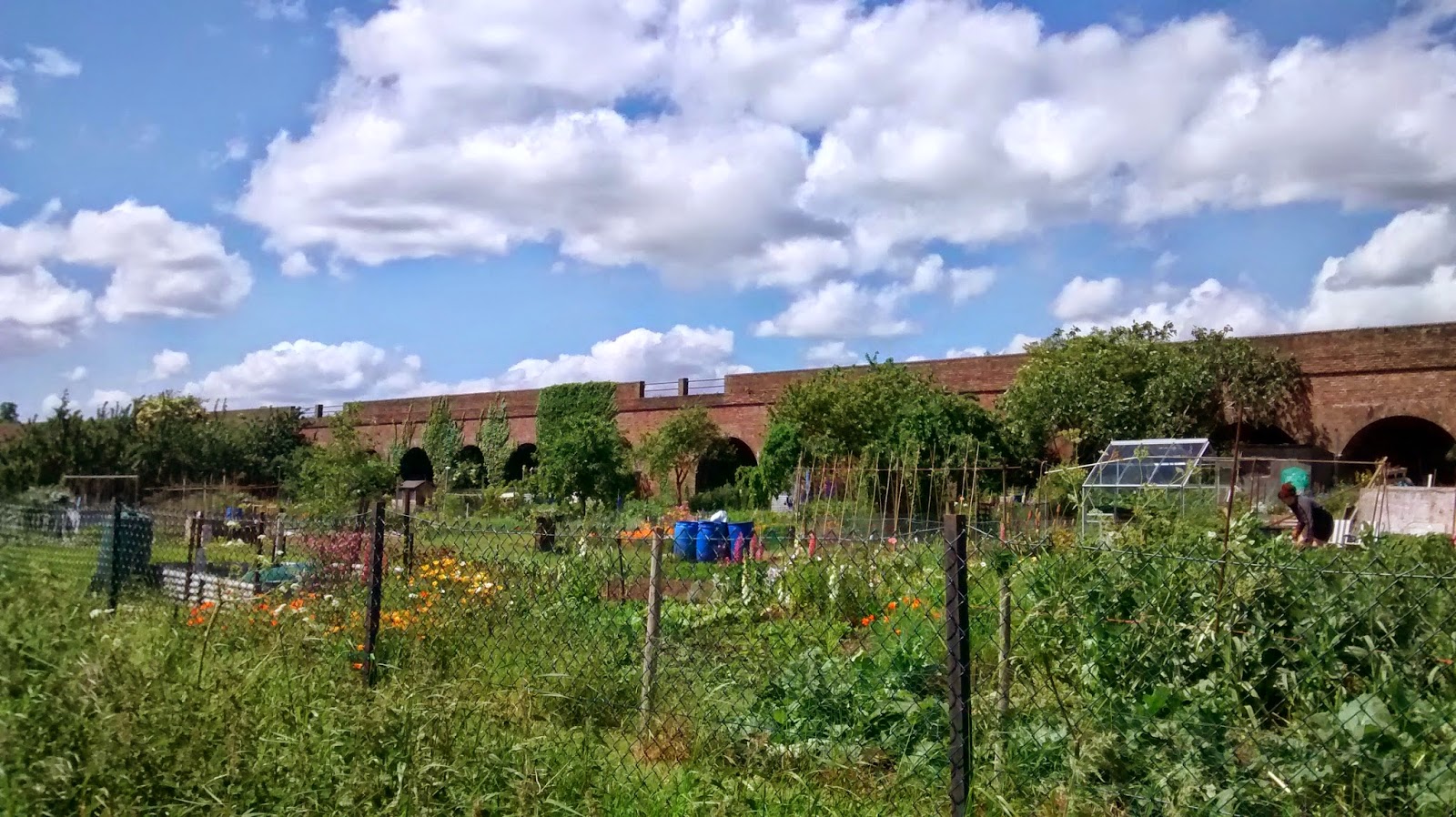 The last mile was particularly tough- the course ended up being long, 13.4miles in actual fact, and boy did I feel that extra 0.3 of a mile! 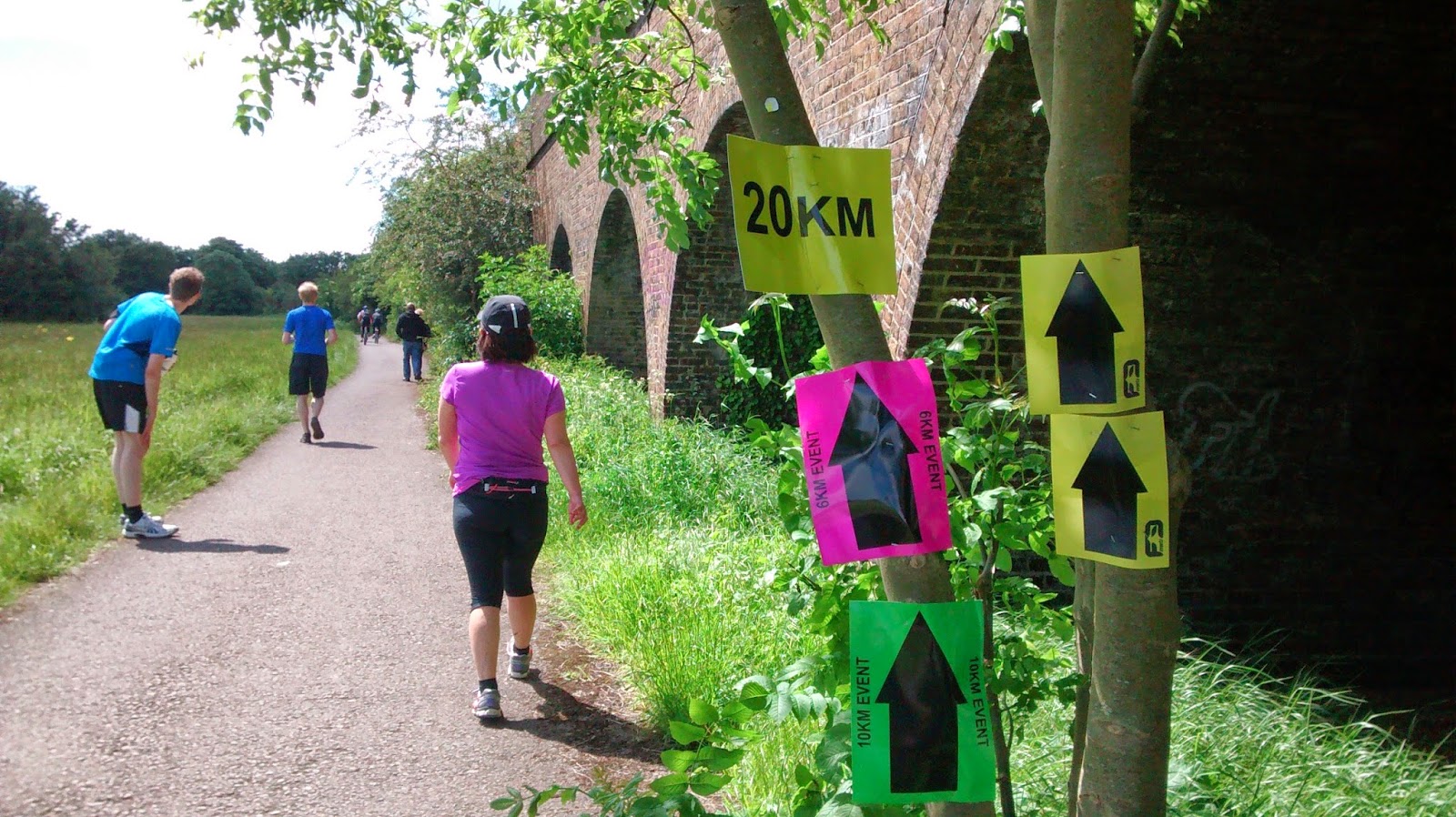 As we rounded the corner and saw Windsor Castle in the distance, I summoned every ounce to make sure we could finish with a “sprint”, holding hands with my brothers, our arms raised over our heads! An emotional and triumphant finish 🙂 And one that could have been amusing had my brothers really decided to sprint, with their super long legs and arms possibly hauling my feet completely off the ground! 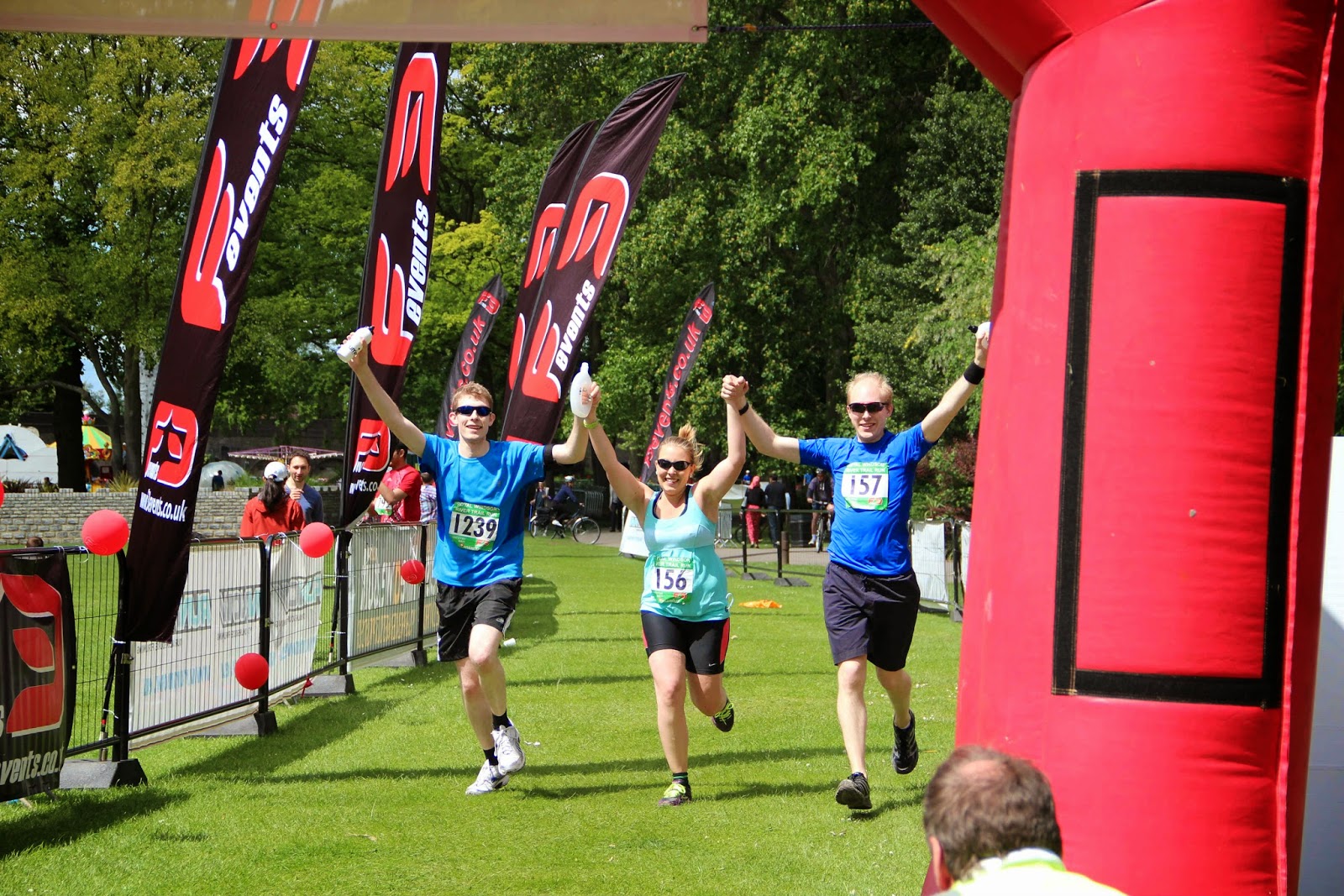 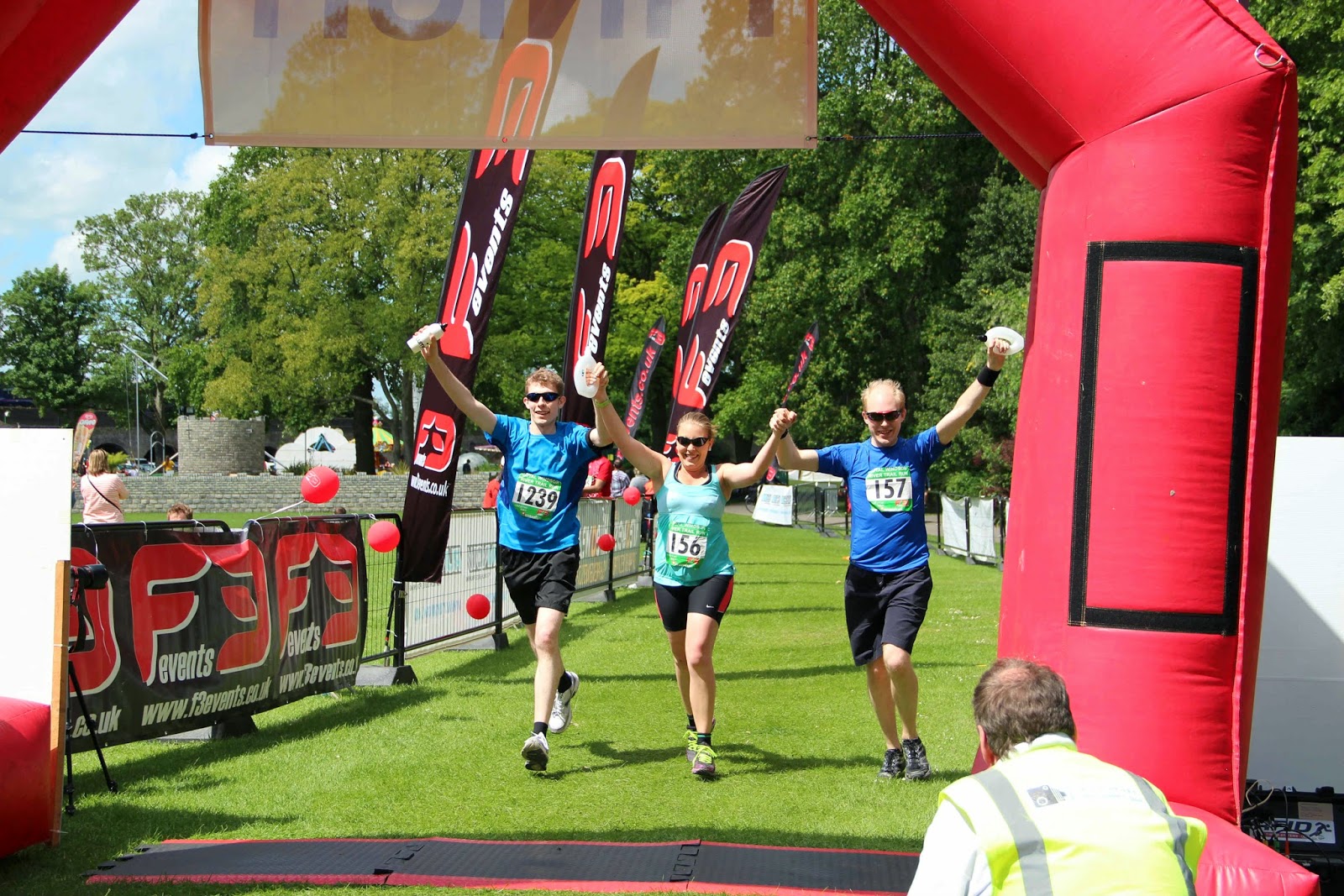 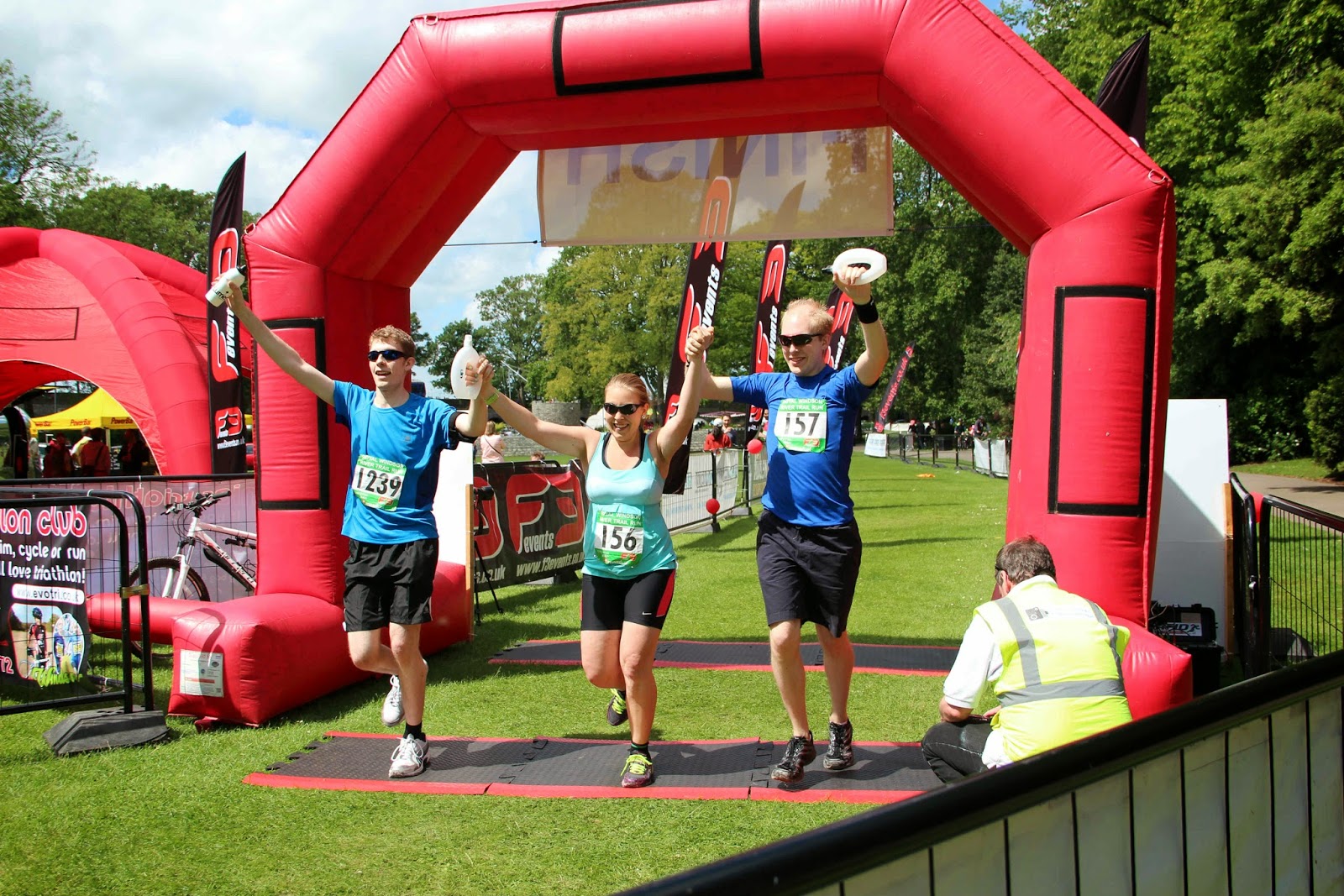 I spotted our family at the finish, and my brother’s girlfriend who took these awesome photos- I was so excited to see them and give them massive hugs, that I almost forgot to claim my medal! Definitely proud of this baby 🙂 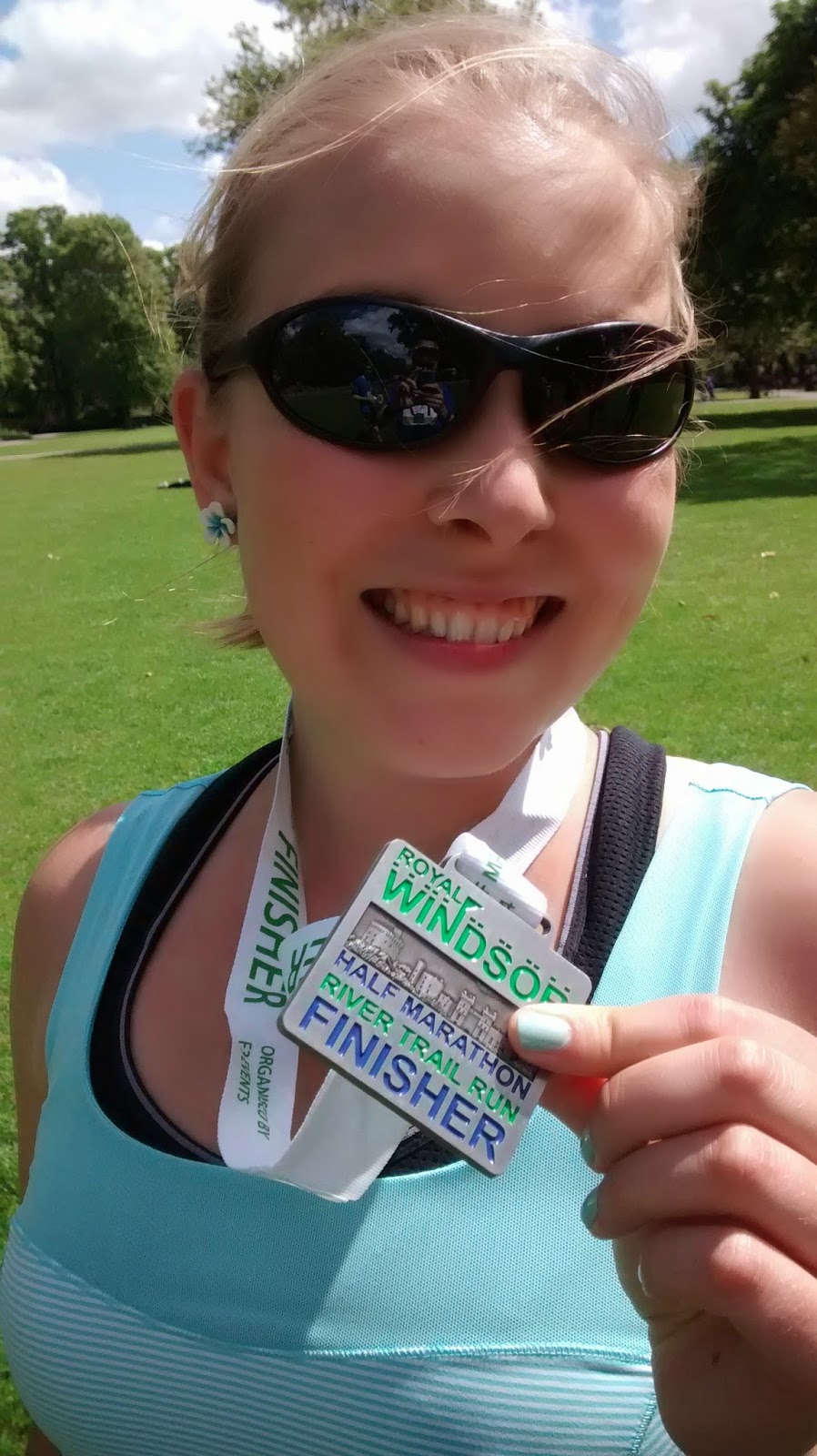 We weren’t given anything else at the finish line, there were water urns which I refilled my bottle from, but no snacks or food, or goody bag of an kind- a little disappointing really. Fortunately I’d come well prepared with bagels, bananas and Nakd bars in my bag which replenished our sugar levels until we could make it lunch.

We went to Brown’s Brasserie in Windsor for a lovely Sunday roast, and spent the meal regaling our family with the trials of our aching legs and sharing the dodgy selfies! 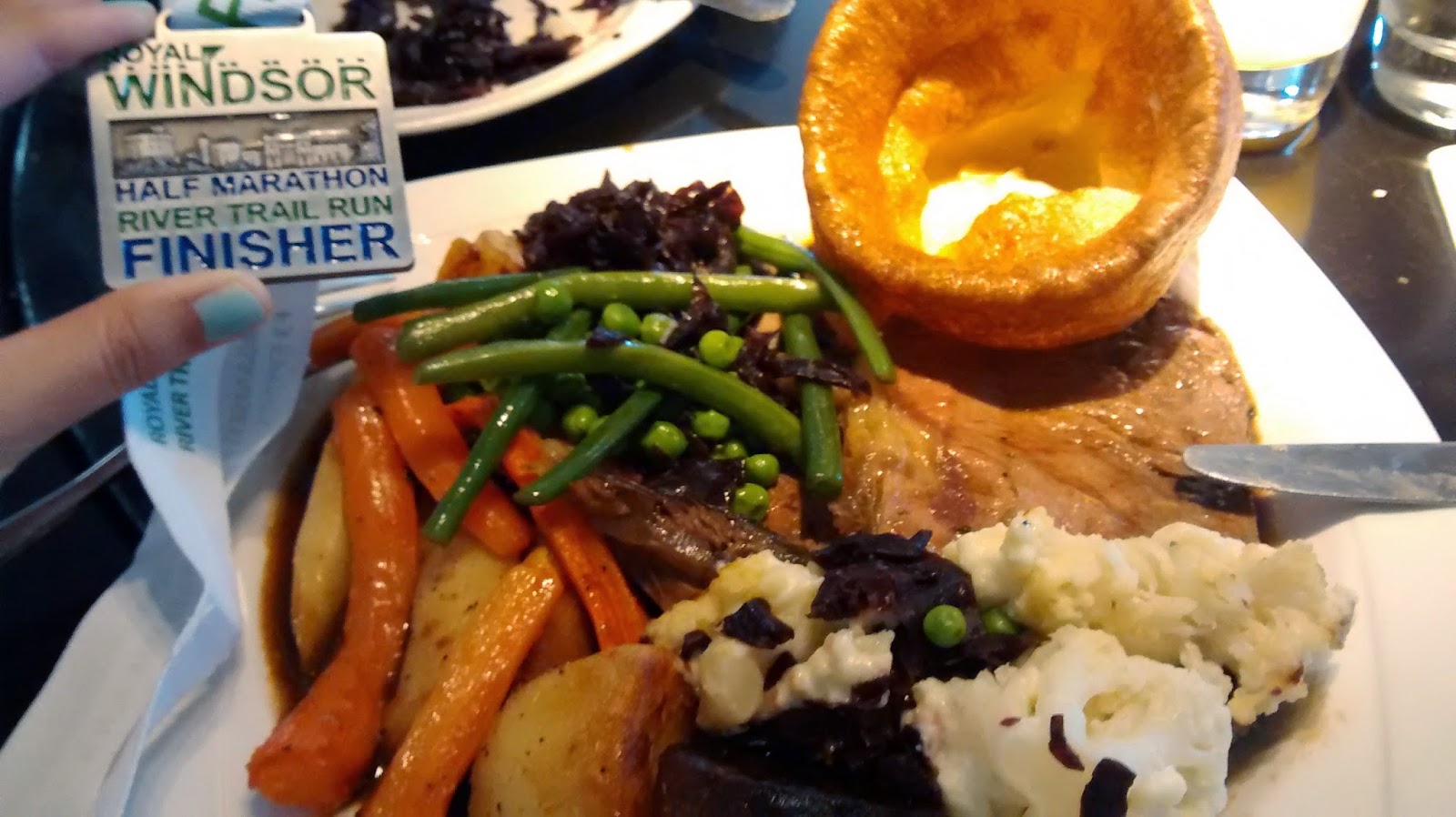 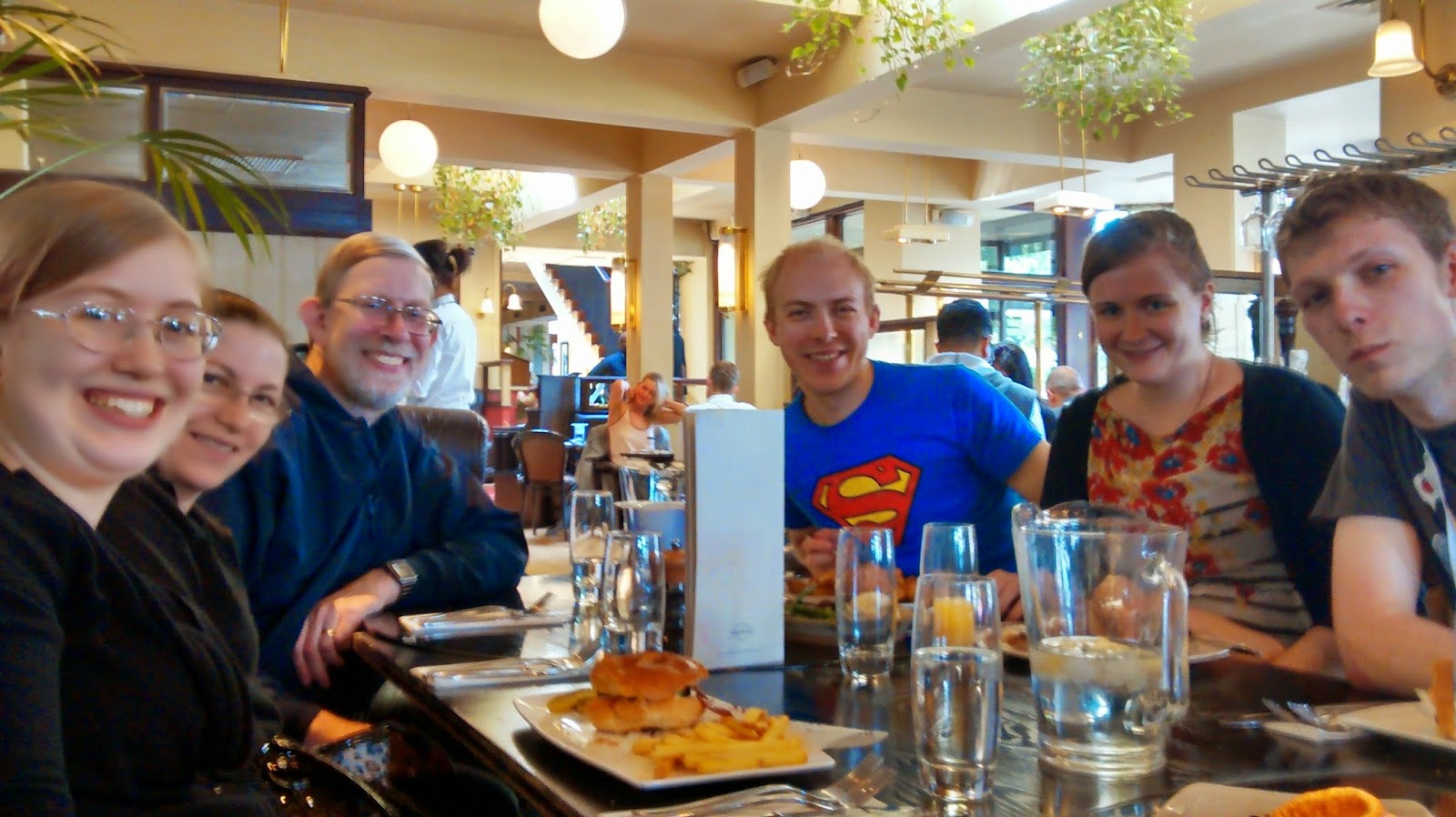 I nearly fell asleep on the train home, but apart from a nasty blister on my little toe my legs were feeling surprisingly good! A week later (and after a much needed Spa Break) I’m almost totally recovered although I’m still taking things easy with my hip. And may already be eyeing up the next Half Marathon!

To finish here’s a quick comment from my brother Sam:

Who am I?
I am Sam, the older of Beki’s two brothers and a year younger than Beki. I am currently carrying out research for my PhD alongside being a part-time lecturer, which naturally takes up a lot of my time.

Why do I run? Why did I agree to do the half marathon?
I started properly running a year or so ago, using the NHS Couch to 5K podcasts as a starting point, before joining the local ParkRun. I really enjoy the self motivation and target setting possible from running and it makes me really happy to get a new PB or run further than I’ve run before. That was why I decided to take part in the half marathon- both for new experiences and to push myself to run further than I ever have done.
How did it go? What was it like running with Beki and Ben?
The race went really well- I was nicely distracted by conversation for a large part of the route, so we were half way round before I was really aware of the distance. I think it really helped having Beki and Ben to talk to and we all kept each other going, so we definitely made a good team! I actually managed to fit in quite a bit of training alongside my studies, so I had actually run the full distance a couple of weeks before, so knew I could do it, which meant I was able to relax and enjoy the route. The last mile was a bit of a slog, but it turned out to be a mile and a half due to the distance not being entirely accurate, so that explains it somewhat! But crossing the line with Beki and Ben, all in a line with arms raised was a fantastic experience and something that I will remember for a long time! 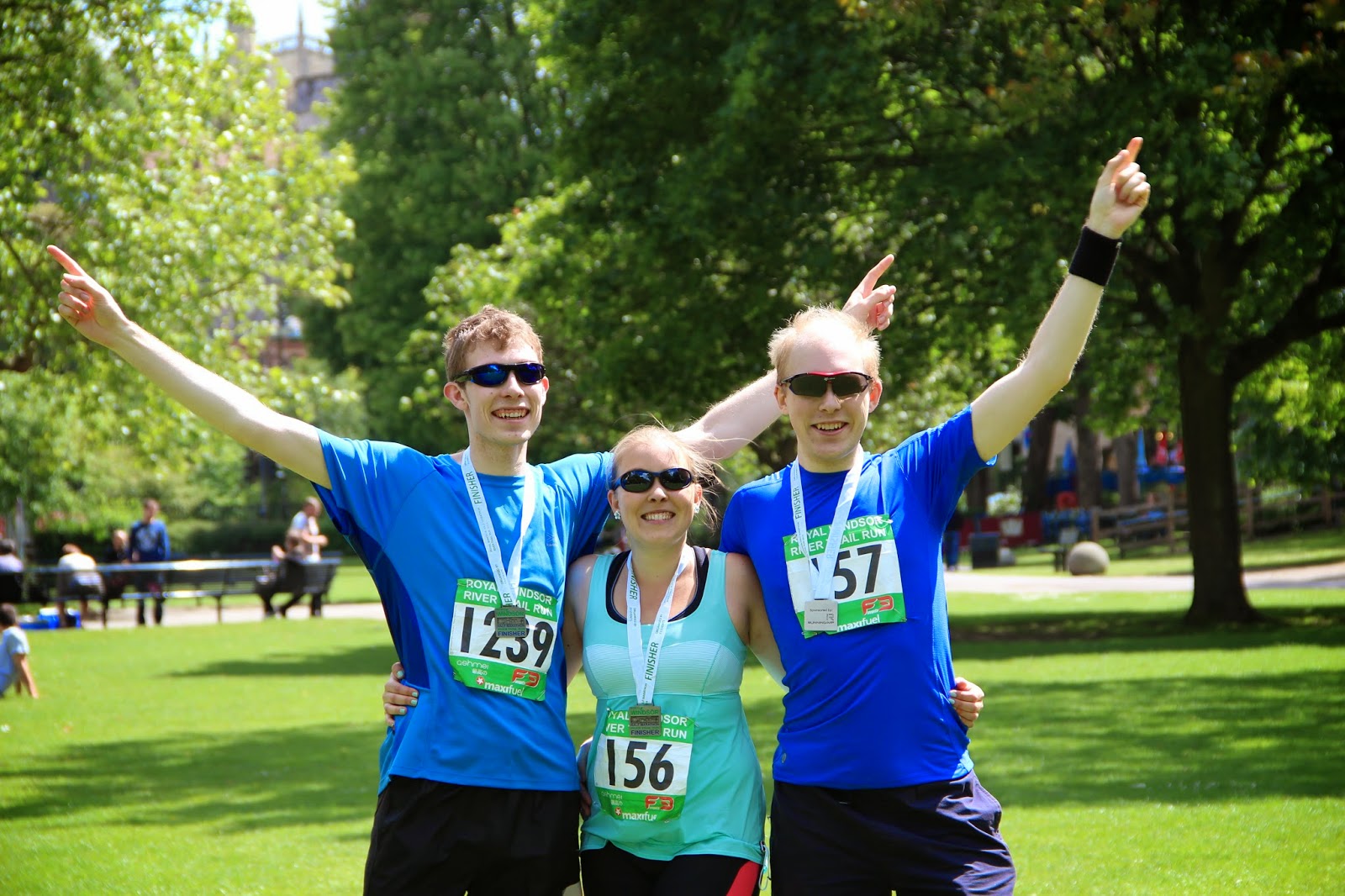 Note: Of major note is the fact that the timing mats for this race didn’t work, so we unfortunately don’t have an official time. For a first half marathon this is somewhat disappointing, and frankly the response by Stuweb and F3 events has been pretty unsatisfactory. Added to the lack of toilets and fuel at the finish line, and confusion over timing chips/waves in the pre-race information, this wasn’t a great race for organisation. For me the achievement of my first half and running with an awesome couple of guys meant that totally didn’t matter! But it’s definitely something to bear in mind. FYI, my Garmin time was 2:56:10- not particularly fast, but it’s under 3 hours, something to beat next time and hey, we finished a Half Marathon!
Have you ever raced with family members? What race errors are deal breakers for you?
Beki x
Share on
Previous Post Next Post