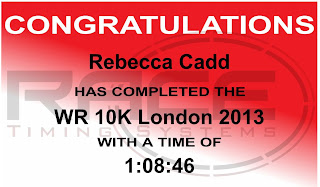 I signed up for this race way back in January, enticed by the promise of free tea and cake at the finish line (!), and a fun sounding route around Finsbury Park.
The course was actually 2 laps of the rather hilly park, but at least you knew where the hills were by the second lap (like the nasty uphill at 4 and 9k) and the park was leafy and green.

The rain even decided to hold off after a brief shower during the warm-up, and we had some beautiful sunshine.

I managed to meet up with some running buddies from Team Naturally Run, as well as the Write This Run crew – the support from those spectating around the course (I loved Liz’s sign which read “your feet hurt because you’re kicking so much ass!”) and runners who had finished already but stayed to cheer at the finish line was much appreciated!
My running has been at best, sporadic, and at worst non-existent this past month- my longest run was 4.5miles at the start of August, and I hadn’t run for the last 2 weeks due to knee niggles and being too tired from Crossfit and cycling. So I didn’t really have high expectations!

But everyone knows what the atmosphere and excitement of a race can do, so I decided to “think positive” and lined up behind the 60minute pacer (they all had great foam hands which were easy to spot).

This went well for the first lap, actually beating my 5k PB, but I gradually slipped behind and when the 70min foam hand started creeping up on me I gave myself a mental kick – no way was I letting them pass me!

I ground it out up that last hill at 9k and finished in a respectable time considering my lack of training – pretty similar to my We Own The Night result, and something I am very happy with!
We were bombarded a little with stuff once over the finish line, including a race tshirt, goody bag, medal, bottle of water and several advertising leaflets – I nearly ran out of hands! 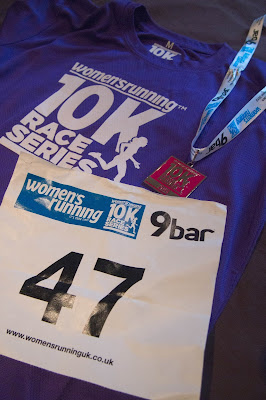 The goody bag was pretty decent though containing a copy of Women’s Running, a 9bar, energy drink and some other smaller treats. 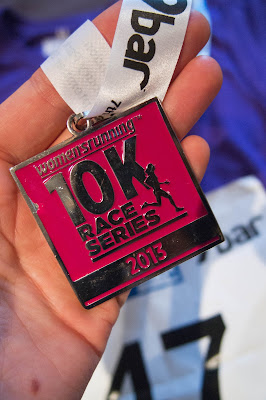 The race tshirt was a technical fabric and a gorgeous purple colour so I will definitely be wearing that again! The medal is nice and chunky too 🙂
There were several race photographers around the course, some of which I spotted and attempted to smile at, although it may have come out as more of a grimace so we shall have to see when they’re released whether any are respectable! There was a water station with small bottles at about 2.5k (and 7.5k) so I grabbed a bottle on my first lap and carried it with me the rest of the way. The marshalls were good, and they even read my name out as I crossed the finish line- I’d definitely recommend the Women’s Running 10k as a fun smaller race (600 participants), with a great route.
The banana muffin and hot cup of tea after a cooldown and stretch was even more of a bonus! 🙂 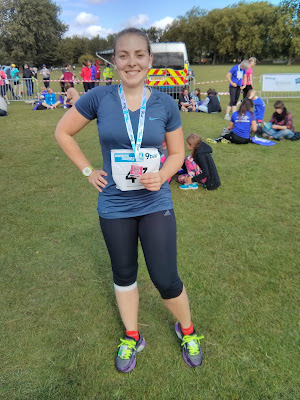 Did you race this weekend? Any fun post-race treats?